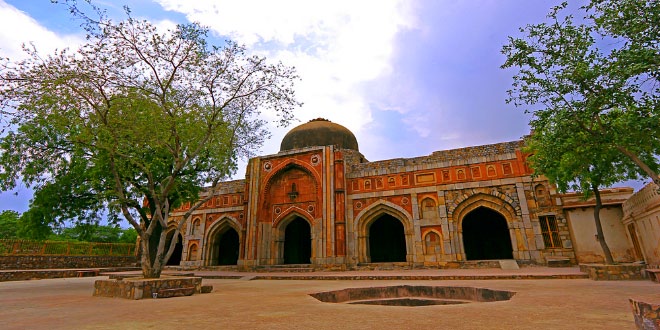 Jamali Kamali Masjid is put up within the Archaeological Village complex in Mehrauli and houses a mosque and a tomb. Esteemed highly for its sanctimonious import, this mosque has been named after the Sufi saint Shaikh Fazlullah, better known as Jalal Khan or Jamali. The identity of Kamali, however, remains shrouded in mystery. Although the edifice was constructed in 1528-1529, Jamali was buried here in the year 1535. This impressive sandstone and marble edifice is a classic specimen of Mughal mosque architecture. In fact, the mosque displays a shift in Indian architectural style from the Madhi Masjid to the Qila-i-Kuhna mosque. The tomb, which lies adjacent to the mosque, just like the masjid, is richly adorned and inscribed with the poetic verses of Jamali. This mosque is one among the hundred and seventy-two historical monuments, which are under the jurisdiction of Delhi Archaeological Department. To know more about this holy shrine, follow the write-up.

The Jamali Kamali Mosque was built around 1528-29 and was completed during the rule of Mughal Emperor Humayun (1530-1540 A.D.). Jamali, who belonged to Sunni merchant family, was a famous Sufi saint and poet. He was the court poet of Sikander Lodi, but was equally famous among the Mughals, especially Babur and Humayun. His poetic works mainly reflected Persian spiritualism. ‘The Sun and Moon’ and ‘The Spiritual Journey of the Mystics’ are some of his most famous poetic creations. After his death, his tomb was placed adjacent to the mosque. Although, not much is known about Kamali, he is often associated with Jamali. Their mausoleums are placed next to each other, just adjacent to the mosque. Hence, the name Jamali Kamali Masjid. This mosque is apparently one of the oldest specimens of Mughal architecture in India.

This mosque is famous for its brilliant and attractive visual designs made of gray stone (Delhi Quartz), extracted from the ranges of Aravalli. The entire mosque is a mosaic of different hued stones that adds to the stunning visual appeal of this edifice. In the mosque, there is a large prayer hall with a big courtyard. It has five porticoes and several domes and arches. The arcs are very beautifully ornamented with carvings and designs. The lined pillars add to the beauty of the main arch. The prayer hall has a mehrab and the walls are designed with the transliterations from Holy Quran. There is a porch through which one can go anywhere in this double storied mosque. There are eight pillars on the four corners of the mosque and the back walls of the mosque are flanked by net windows. The ceiling of the tombs is adorned with fine stuccowork and glazed tiles. This kind of rare amalgamation of different designs and patterns is what makes this mosque stand out among others.

If you happen to visit the Jamali Kamali Masjid, then do spare some time to check out other nearby attractions like Hazrat Nizamuddin Auliya Dargah, Madhi Masjid, Abdu’nNabi’s Mosque, Begampiri Masjid, Idgah and more.

The most favorable time to visit the mosque is from October to March. Since summers in Delhi are usually blazing hot, planning your visit any time during the winter months would make sense.

By Air:
Being the capital city of India, New Delhi is linked to almost all the major cities in the country by air transport. You can avail the services of the Indira Gandhi International Airport, which is 18 kms away from the shrine.

By Train:
New Delhi is well-connected by train. The shrine is 17 kms away from the New Delhi railway station and is 16 kms away from Nizamuddin Railway Station. You can catch a train to reach Delhi and then you can hire a taxi or an auto-rickshaw to reach the shrine.

This mosque is a popular tourist site. The designs and the patterns of both the mosque and mausoleums are striking and visually appealing.