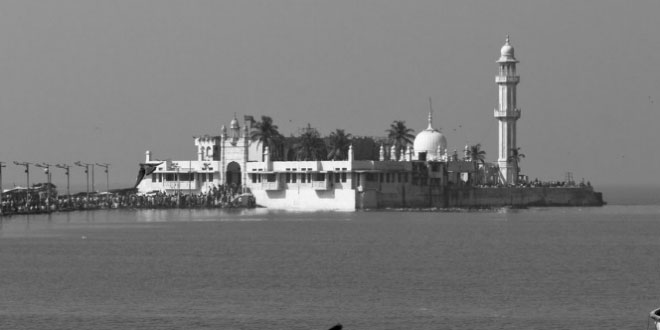 Haji Ali is a revered Dargah (tomb) of the Muslims. Located on the brink of the shoreline of Worli Bay, this sacred shrine stands tall amidst sparkling blue sea as a mark of remembrance and reverence to Pir Haji Ali Shah Bukhari (R.A.). The mosque, which is apparently one of the most popular landmarks in Mumbai, was built in the 19th century. Not just the Mumbaikars but people from different parts of the globe come here to pay their homage to Haji Ali. The tomb is a classic example of Indian Islamic architecture. The sepulcher of Haji Ali is enshrouded with a brocaded red and green sheet, supported by a delicate silver frame. The 500-yard-causeway that extends to the Arabian Sea is the major highlight of this striking shrine. The Dargah is a renowned pilgrimage site among the Muslims and receives thousands of devotees everyday who visit this place to offer prayers and get their wishes fulfilled. The marble pillars inside the main hall are decorated with multi-hued mirrors and engraved names of Allah, which adds on to the beauty and sanctity of the place.

Haji Ali Dargah was built in the year 1413. The mosque is named after a wealthy Muslim merchant Pir Haji Ali Shah, who renounced all his worldly belongings before embarking on a holy pilgrimage to Mecca. As per the legend, the Saint once bumped on a poor woman who was wailing on the road. He walked up to her and enquired the cause of her grief. The poor women told him that she had stumbled and fallen, apparently spilling the oil that she was carrying, and now she was scared of being brutally beaten by her husband. On hearing this, he requested the woman to take him to the spot where she lost the oil. On reaching the place, he bent and poked a finger into the soil and much to the woman’s amazement, a stream of oil gushed out. The ecstatic woman filled her vessel with oil and went home. Later, Pir Haji Ali Shah Bukhari had a disturbing dream that he had injured Mother Earth by his act. Full of remorse, he soon fell ill and requested his followers to cast the coffin carrying his body into the Arabian Sea, once he died. Haji Ali left this world during his journey to Mecca and miraculously the casket carrying his body floated back to these shores, being stuck on the string of rocky islets just off the Worli shore. The construction of the mosque took place after this incident.

One of the major attractions of this place is the Worli Bay. The seashore absolutely lends a scenic look to this age-old shrine. Trailing down the long walkway that cuts through the sea and leads you to the Dargah, is a one-of-its-kind of an experience. There is a mosque attached to the mausoleum of Haji Ali. This monument has always been the ultimate attraction of Mumbai. The best time to visit the Dargah is during Eid-E-Milad-Un-Nabi festival and the Urs (death anniversary) of Pir Haji Ali Shah Bhukari, which is celebrated on the 16th of every Islamic month (17thshab). The trust performs the rituals as per Islamic traditions and distributes sweets and food to the devotees and the visitors. A special program of Milad and prayers is held in remembrance of the Urs of Pir Haji Ali Shah Bukhari. During Eid-E-Milad-un-Nabi, the birth anniversary of Prophet Mohamed, the trust organizes a function and puts in display the sacred relics of Prophet Mohamed after Namaaz-e-Zuhr.

How To Reach – Haji Ali Dargah

One needs to take a flight to Chhatrapati Shivaji International Airport, Mumbai to reach this shrine. From the airport, you can avail the public transports like bus or rickshaw to reach the shrine.

B.E.S.T city buses are available to this mosque. One can easily take a bus to reach the place. If you find difficulty in making the rickshaws agree to take, bus is the next best option to you.

Women are advised to cover their head with a dupatta and maintain the code of dressing when visiting this place. Since the mosque is located on the seashore, during the monsoon one gets a feeling that the mosque is floating in the sea. Hence, it is also called as the ‘floating mosque of Mumbai’.