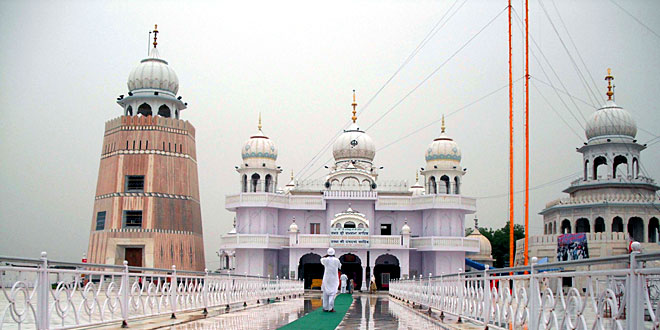 Gurdwara Damdama Sahib, the ‘Seat of Temporal Authority’, is indeed one of the revered ‘takhts’ of the Sikhs. This was the place where Guru Gobind Singh, the tenth guru of the Sikhs, took repose from the raging political upheaval and spent time in serenity adding valuable verses to Sri Guru Granth Sahib. Located in the village of Talwandi Sabo near Bhatinda, Punjab, this ‘takht’ was constructed in the year 1705. On 18 November 1966, the Shiromani Gurdwara Parbandhak Committee declared this Gurudwara as the official takht of the Sikhs. Later on, in the year 1999, the Government of India announced it as one of the five Takhts during tercentennial celebrations of the Khalsas. During Baisakhi, a grand fair is held every year and devotees from all around the globe unite here to receive the blessings of the tenth Guru and to enjoy the festival with great pomp and joy.

Damdama Sahib, also known as Talwadi Sabo, the fifth holy seat of the Sikhs, owes its importance in history as the place where Guru Gobind Singh Ji revised the authentic version of ‘Adi Granth’, better known to us as ‘Guru Granth Sahib’. It was in this place that Guru Gobind Singh took a hiatus after the historic battle of Muktsar and spent almost a year adding verses to the original ‘Adi Granth’. Hence, the name ‘Damdama Sahib’, which means ‘breathing place’. Damdama Sahib was the place from where Guru Gobind Singh Ji issued his ‘hukamnamas’, which is why this place came to be known as ‘Akal Takht’. Erstwhile, an army cantonment and seat of learning for the Sikhs, today, this place serves as the headquarters of Nihangs. The Gurudwara was first erected by Sardar Bhagel Singh in 1783 after his ascension of Delhi. Later on, Maharaja Ranjit Singh renovated this high seat of Sikhs. Deorhi, sarovars, shrines, and bungas are the mainstays of this historical edifice.

Damdama Sahib is celebrated in history, not only just for its humungous historical implications, but also for the spiritual imports. Apart from being one of the most revered shrines of the Sikhs, the headquarters of the Nihangs, and a learning center, Damdama Sahib is also home to rare historical relics. The inner gallery of the Gurudwara boasts of rare collectible like prized sword of Guru Gobind Singh Ji, a huge portrait of the Guru, his rifle, a mirror, a Persian sword, a transcribed copy of ‘Adi Granth’ and more. Besides, you can visit some of the famous inns like High Inn, Malwaai Inn, and Inn Majbia, which are some of the major highlights of this Gurudwara. And yes, not to forget, the three tanks – Nanksar, Akalsar and Gurusar Sarovar that are a treat for the eyes. What more, this shrine houses nearly eight Gurudwaras that are a must visit.

The ideal time to visit this Gurudwara is anytime between October to April as the temperature is moderate and the weather is pleasant and enjoyable.

The nearest airport to the shrine is the Indira Gandhi International Airport, which operates both national and international flights. When you reach the airport, you can hire a taxi or take a bus to reach the shrine.

The Ambala Railway Station is close to the Gurudwara. After reaching the railway station, one can take a taxi or avail public transport to reach the shrine.

Punjab has well-connected roads and is well linked to the cities of Chandigarh, Delhi, and Haryana. Various public and private buses will easily take you to this place.

Damdama Sahib is noted because of its holy implication, for being the place of completion of ‘Guru Granth Sahib’ by the tenth Guru of the Sikhs. This Takht provides the devotees with serene, peaceful and positive atmosphere. People from all over the world come here to take the blessings of the tenth Guru.