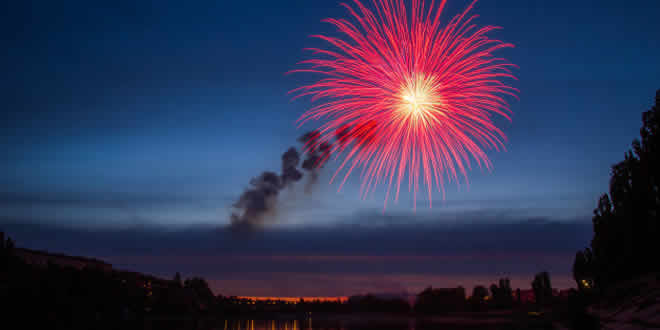 Not guns, not thunder,
but a clutter of clouded drums
That announce a fiesta:
abruptly, fiery needles Circumscribe
on the night boundless
chrysanthemums.

Softly, they break apart,
they flake away,
where Darkness, on a svelte hiss,
swallows them.

Delicate brilliance: a bellflower opens, fades,
In a sprinkle of falling stars.
Night absorbs them
With the sponge of her silence.

Babette Deutsch (22 September 1895 – 13 November 1982) was an American poet, critic, translator, and novelist. Born in New York City, the daughter of Michael and Melanie (Fisher) Deutsch, she matriculated from the Ethical Culture School and Barnard College, graduating in 1917 with a B.A. She published poems in magazines such as the North American Review and the New Republic while she was still a student at Barnard. In 1946, she received an honorary D. Litt. from Columbia University. On April 29, 1921, Deutsch married Avrahm Yarmolinsky, chief of the Slavonic Division of The New York Public Library (1918-1955), also a writer and translator. They had two sons, Adam Yarmolinsky and Michael.
We hope you liked this poem “Fireworks” by “Babette Deutsch”  – We request you to give your feedback using comments box given below. If you like it – please Share or Like it!
Share

Mahashivaratri is an auspicious occasion for Hindus. It is the festival when Lord Shiva, one …