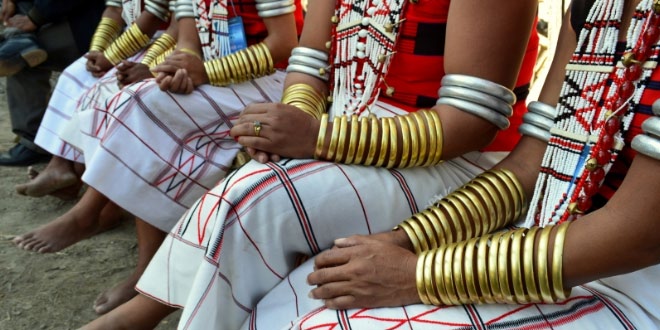 Hornbill Festival Kohima Images: The Hornbill festival is a celebration held every year in the first week of December, in Nagaland, North-east India. It is also called as the ‘Festival of Festivals’.

The Hornbill festival held in the first week of December shows that with its stunning natural beauty and great cultural traditions, Nagaland can offer a rich fare to tourists.

NAGALAND, with its diverse tribal culture, is a land of festivals. A narrow strip of mountainous territory with rugged hills, emerald valleys, sparkling streams and a rich variety of flora and fauna, the 16th State of the Indian Union has salubrious climate throughout the year. It is bounded by Assam in the west, Myanmar in the east, Arunachal Pradesh in the north and Manipur in the south. Sometimes referred to as the ‘Switzerland of the East’, Nagaland represents unimaginable beauty, moulded perfectly for a breathtaking experience. For the adventurous, the State is an ideal place for trekking and jungle camping and offers limitless possibilities for exploring its lush sub-tropical rainforests, which are a treasure trove of medicinal plants. The 20-lakh-strong Naga people, by nature, are fun lovers, and life in Nagaland is one long festival.