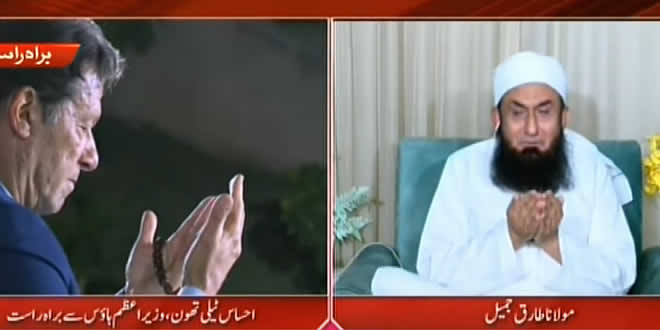 Maulana Tariq Jameel also blamed the media for spreading lies and appealed to Muslims to only eat Halal food. He appealed to Pakistani PM Imran to request everyone to beg for forgiveness to Allah.

Maulana Tariq Jameel, a religious preacher of the Tablighi Jamaat and a scholar, was seen crying profusely on Pakistani television during a fundraising event attended by Prime Minister Imran Khan. This was after members of the Islamic Missionary organization spread the virus across the lengths and breadth of the country. While asking for Dua, Jameel was seen crying like a man-boy begging Allah to save the world from the Wuhan Coronavirus. And in the presence of Imran Khan, the Islamic preacher made some rather incendiary remarks.

Snorting every two seconds and crying, Maulana Tariq Jameel prayed to Allah to protect those battling the Wuhan Coronavirus at the frontlines. At one point, he says, “In a lockdown, ten people are sitting inside a home. What’s the benefit of a lockdown?” And then proceeds to break into another bout of profuse weeping. He tells Allah that only he can get rid of the calamity and lockdown will not help much.

Maulana Tariq Jameel also says, “Just as a child says to his mother, ‘I am tired of crying in front of you, at least listen to me now,’ I am also telling you that I am tired of weeping in front of you. Please heed our prayer. We don’t have anything else.” He begs Allah to help everyone but especially the Muslim Ummah. Maulana Tariq Jameel also begs Allah to grant the honour of a Martyr to those who have died due to the virus. He begs Allah to protect everyone in the country from the deadly virus.

During his address prior to the prayer, Maulana Tariq Jameel spoke about the plagues in earlier times and claimed that these were natural disasters sent by God and begging for repentance from Allah was the only way for humans to rid themselves of the calamity. He also offered sermons on the kind of clothes women should wear. Expressing dismay, he said, “Hamare betiyon ko kaun nacha raha hai? (Who is making our daughters dance?)” He said that when Muslim women and the youth indulge in shameless and immodest behaviour, then Allah inflicts pain and agony on humans.

During the course of the sermon, Maulana Tariq Jameel also blamed the media for spreading lies and appealed to Muslims to only eat Halal food. He appealed to Pakistani PM Imran to request everyone to beg for forgiveness to Allah. The entire agenda of his discourse was painting the Wuhan Coronavirus as punishment for humans and only forgiveness from Allah could forgive them. Even so, blaming women for the Wuhan Coronavirus appears far-fetched. He insisted that not even ventilators or vaccines could help humans fight the deadly pandemic but only Allah could.

Who is Maulana Tariq Jameel?

Maulana Tariq Jameel is one of the most prominent Islamic television preacher, religious writer, scholar and a member of the Tablighi Jamaat. He belongs to the Deobandi school of Islam. He regularly offers sermons on self-purification, the importance of following Allah’s diktats and following the path shown by Prophet Muhammad. He was born on the 1st of January, 1953 at Mian Channu in the Punjab Province of Pakistan. He is an alumnus of the Government College University, Lahore. He received his Islamic education from Jamia Arabia, Raiwind, where he studied Qur’an, Hadith, Sufism, logic, and Islamic jurisprudence.

Maulana Tariq Jameel holds great influence among Urban Muslims. According to the Muslim 500, “In addition to running a madrasa in Faisalabad, Pakistan, Maulana Tariq has delivered thousands of lectures around the world. He has been very effective in influencing all types of the community ranging from businessmen and landlords to ministers, actors, and sports celebrities.”

The Role of Tablighi Jamaat in spreading the Wuhan Coronavirus

The Tablighi Jamaat has spread the Wuhan Coronavirus not only in India, where it has emerged as the greatest cluster of Coronavirus cases, but also across other countries in South Asia and in territories as far as Palestine. Islamic religious events held in Pakistan and Malaysia, too, served as conduits for the virus to spread to numerous countries in the region and even to countries as far off as Palestine. In Pakistan too, the Tablighi Jamaat event at Raiwind served as the conduit for spreading the virus across the entire country.

At one point of time, over half of the Wuhan Coronavirus cases in Malaysia were linked to the Tablighi Jamaat event held at a mosque outside of Kuala Lumpur. Most cases in Brunei and at least 10 cases in Thailand were linked to the Islamic Missionary organization. Eleven out of twelve people who tested positive for COVID-19 coronavirus on March 16 in Cambodia had attended the Islamic evangelical event in Malaysia.