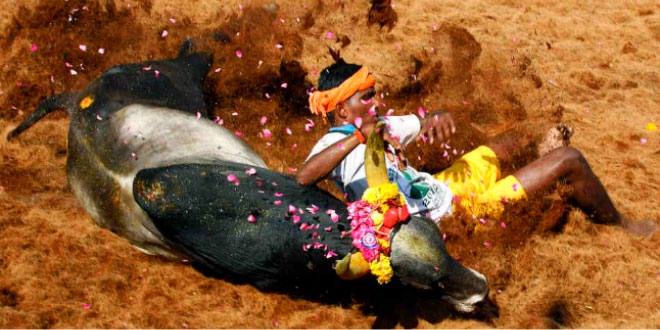 The blanket ban on Jallikattu, the bull taming/vaulting sport, will result in the vanishing of Indian breeds of bulls and cows and would lead to import of foreign animals, says an expert at a cattle research foundation.

Located in Tiruppur district, around 380 km from here, the foundation breeds Kangayam bulls and cows and also works on preservation of native breeds.

He said there was no chance of cruelty to the Jallikattu bulls as they were checked by doctors before and after the event.

From the entry point or vadivasal, the bull runs for a short distance by which time the sportspersons have to hold on to its hump for a minimum period of time, he said.

“The government should jail the owners if their bull is found to be tortured. Punish the guilty and not the sport,” Sivasenapathy said.

As to why the native breed would vanish if Jallikattu was banned, he said that in rural areas, having a Jallikattu bull was a prestige.

“If there is no sporting event, there is no need for a person to raise a bull which in turn will result in the ultimate death of the species. For breeding purposes, the cow-bull ratio is 40:1,” Sivasenapathy said.

He said the apex court could constitute a committee to study the issues before coming to a decision.

Sivasenapathy said the population of the Kangayam variety has come down to one lakh animals from 11 lakh in 1990.

People with total disconnect with livestock, rural life or villages are the ones who claim that farmers do not love animals whereas the farm animals are part of the rural household.

He said cattle farming in India was a part of household activity and not a corporate activity as in the West.

“On a larger perspective, the opposition to native sports like Jallikattu is part of a game plan to kill the native animal species first and then populate the country with imported animals,” Sivasenapathy said.

“In my younger days, I used to grow tomatoes just by squashing one tomato in the garden. But today, you can’t grow tomato plants like that as they are genetically modified so that seeds do not grow into plants,” he said.