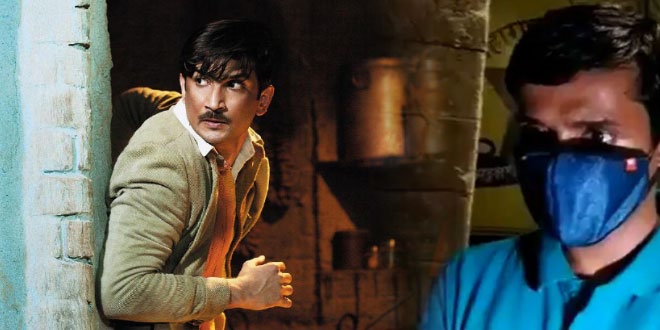 Bihar DGP Gupteswar Pandey informed that IPS officer Vinay Tiwari was not even provided accommodation in the IPS mess despite requests. He has been reportedly staying in a guest house in Goregaon.

There were already reports of Mumbai Police’ non-cooperation to the Bihar Police officers who were in Mumbai for investigations into Sushant Singh Rajput’s case. In the latest development, Senior Bihar Police officer IPS Vinay Tiwari was reportedly sent to quarantine forcefully by BMC officials on reaching Mumbai on Sunday.

Tiwari was visiting Mumbai to lead the police team in the Sushant Singh Rajput case. A four-member team of Bihar Police is already in Mumbai investigating the case.

Director-General of Police, Bihar, IPS Gupteshwar Pandey showed displeasure on BMC’s action and posted a tweet from his twitter ID. He said, “IPS officer Vinay Tiwari reached Mumbai today from Patna on official duty to lead the police team there, but he has been forcibly quarantined by BMC officials at 11 pm today.”

IPS officer Binay Tiwari reached Mumbai today from patna on official duty to lead the police team there but he has been forcibly quarantined by BMC officials at 11pm today.He was not provided accommodation in the IPSMess despite request and was staying in a guest house in Goregaw pic.twitter.com/JUPFRpqiGE

He added that Tiwari reached Mumbai from Patna on official duty to lead the police team. However, he was forcibly sent to quarantine by BMC officials at 11 PM. Pandey also informed that IPS Tiwari was not provided accommodation in the IPS Mess even he requested for it. The officer is currently staying in a guest house in Goregaon. He also added a video of IPS Vinay Tiwari at the quarantine centre.

Sushant Singh Rajput’s father KK Singh had filed a police complaint last week against actor Rhea Chakraborty and her family members. The Bihar Police registered an FIR under various sections of IPC, including abetment of suicide. Singh said in his complaint that Rhea and her family had blackmailed, and harassed Sushant emotionally and financially. He also alleged that she took crores of rupees from Sushant’s account. The complaint also stated that Rhea had left Sushant’s house after a fight and took jewellery, cash and his medical reports with her.

Ankita Lokhande’s role in the investigation

Lokhande, who worked with Sushant in Pavitra Rishta and was in a relationship with the deceased actor for a long time, went to Patna for his funeral. At that, she showed his family some text messages and shared information about the problems Sushant was facing because of Rhea. She also provided all the information to Bihar Police. When Bihar Police reached Mumbai, she had also reportedly assisted them to commute in Mumbai for investigation as Mumbai Police allegedly did not provide any support for them.

The case has turned into a tussle between Police departments of two states. DGP Pandey earlier said that Sushant’s death should not turn into a Bihar vs Maharashtra when he was informed that Mumbai Police is not providing any assistance. DGP, in one of his statements, urged Rhea to join the investigation as she is currently hiding.

The Mumbai Police is also probing the case. So far, they have interrogated some high-profile celebrities including Mahesh Bhatt, Rajeev Masand and many more. There were reports that when Bihar Police asked for information on Sushant’s ex-manager Disha Salian’s alleged suicide, the Mumbai Police said that they have accidentally deleted all the files.