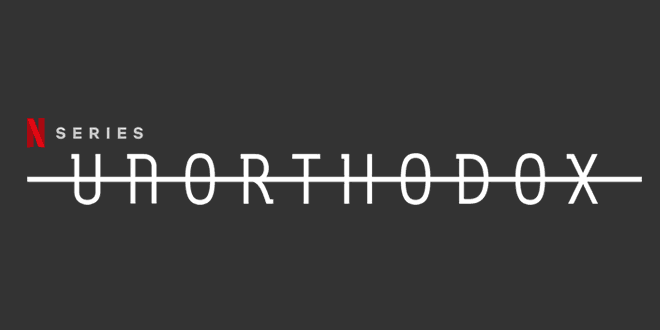 Unorthodox is a German-American drama web television miniseries that debuted on Netflix on March 26, 2020. The series is loosely based on Deborah Feldman’s 2012 autobiography Unorthodox: The Scandalous Rejection of My Hasidic Roots. It is the first Netflix series to be primarily in Yiddish.

A 19-year-old Jewish woman named Esty runs away from her arranged marriage and Ultra-Orthodox community in Williamsburg, Brooklyn, New York City. She moves to Berlin, where her estranged mother lives, and tries to navigate a secular life and take classes at a music conservatory. Her husband, who finds out she is pregnant, travels to Berlin with his cousin, by order of their Rabbi, to try to find her.

A girl fleeing USA, New York to be more precise, to take cover in Germany… could a tale be more quixotic? However, Unorthodox is not only credible, but also based on a factual story. Inspired from Deborah Feldman’s 2012 autobiography Unorthodox: The Scandalous Rejection of My Hasidic Roots, this take on Deborah’s life, Netflix’ first series in Yiddish apart from English and German, takes you into the orthodox world of an ultra-Orthodox Hasidic Satmar community in Williamsburg, Brooklyn.

An island unto themselves, their customs, rituals and, above all, beliefs come across like a cultural shocker, making you gasp and wonder… really? Indeed, a young woman trying to find her voice amidst rigid religious and cultural practices would not come as a big surprise to Indian viewers so familiar with similar predicaments.

What is astonishing and also becomes a point of great interest is can a community living in the heart of modernity be so insular to the world around it? If Deborah’s account, Esther, ‘Esty’ in the series, is to be believed, then the answer is a resounding yes. Intercutting time lines the hook here is Esther. What has provoked a diminutive coy girl, who believes marriage is her destiny and life-changing experience, to elope? In this nibbling query and the answer lie the drama, tension and some thrill. Going back and forth in time, we are introduced as much to the resolve of this girl as the customs that bound her. In fact, the Hasidic community comes alive in many dimensions, invariably not too flattering. But the purpose here is not to dehumanise. What sets the series, helmed and written by women, apart is that it does not demonise men, who come across as flawed alright, but not monstrous. If Esther has been brought up to believe marriage and children are her only destiny, her husband Yanky Shapiro (Amit Rahav) is as much a product of deep-rooted conditioning.

The scene where he enquires of a call girl what would please her, while refusing to touch her, is both telling and touching. By the time the four-episode miniseries comes to an end, you are more than empathetic towards him, if not rooting as strongly as for the lead heroine. How holocaust continues to cast a shadow on their life and often determines the life choices of survivours too surfaces, without even once going unnecessarily into unwanted details. Yet detailing is on point. Make-up, costumes, nothing seems amiss. What is more laudable is that demeanour meets the inner essence. Not a single character seems out of place.

Actors such as Amit Rahav, Jeff Wilbusch, and Alex Reid, as the mother, lend credulity and credibility to their parts. Petite and pretty Shira Haas as Esther, of course, is the scene stealer. If she is suitably diffident while submitting to quaint/archaic conventions, her confidence shows and glows when she puts red lipstick on her lips and slowly begins to sway to the beats in a dance club, she has been made to stay away from all her life. It’s these small little touches that elevate the series, making it a fulfilling experience and not just a single note story of a young girl coming into her own.

At several junctures, especially when husband and his cousin Moishe Lefkovitch (Jeff Wilbusch) set out on the trail to find Esty, you are filled with trepidation. The drama is pregnant with some frantic moments, especially those involving Moishe. But this is no cat and mouse game. Rather, if you have had your quota of crime and murders, take a break and submit yourself to the pleasure of a story well, and effectively, told. The only possible grouse one can have is… wish the makers had found or incorporated the translation of the Yiddish song.

Nevertheless, Unorthodox is far more than a cursory peep into another culture. Just the civilisational connect to make us connect with a world, far removed from ours, which, thankfully, Netflix is bringing right on to our doorsteps.