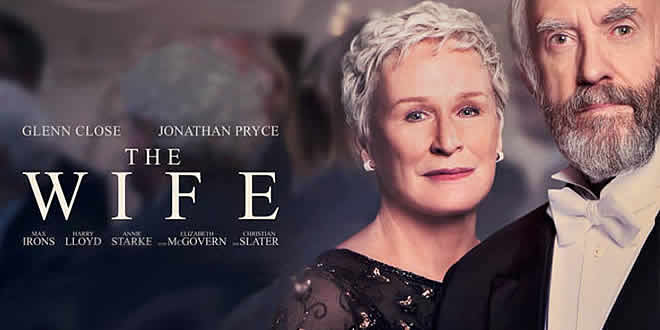 A wife questions her life choices as she travels to Stockholm with her husband, where he is slated to receive the Nobel Prize for Literature.

The Wife is a 2017 drama film directed by Björn Runge and written by Jane Anderson, based on the novel of the same name by Meg Wolitzer. It stars Glenn Close, Jonathan Pryce, and Christian Slater, and follows, mostly in flashback, an older woman who questions her life choices as she travels to Stockholm with her husband, who is to receive the Nobel Prize in Literature.

The film premiered on September 12, 2017, at the 2017 Toronto International Film Festival, and was released in the United States on August 17, 2018 by Sony Pictures Classics. It received generally positive reviews from critics, with Close’s performance garnering widespread acclaim; she won the Golden Globe Award, Screen Actors Guild Award and Critics’ Choice Movie Award for Best Actress for her performance, and is also nominated for the Academy Award for Best Actress and the BAFTA Award for Best Actress.

The Wife hopes to enthrall you with a largely domestic drama of an unravelling that takes wings at the author Joseph Castleman’s (in the center of the storm) most triumphant moment.

Aged couple Joan (Glenn Close) and Joe (Jonathan Pryce) are trying to sleep when the phone rings and they are informed that Joe has indeed won the Nobel. It’s the greatest moment for this literary icon whose 40 years of marriage and writing have culminated in this pinnacle that every author dreams of. They are off to Stockholm to collect the prize.

At a party to celebrate the news, we are privy to an off-the-cuff remark that Joe’s agent makes – a major magazine is bumping a story about President Bill Clinton to make room for a piece on Joe. It’s basically a lead-up to what’s in store for the Castlemans’.

Joan has always been the epicenter of Joe’s life – covering up for his many infidelities and weaknesses over the past 40 years. So, the seething rage at the injustice of it all is well expected. But the timing sucks, I guess. Joe doesn’t expect it and the crumbling edifices of a marriage that survives largely on Joan’s unstinting devotion to its well-being, begins to fall apart. And there’s a much bigger secret, a blooming injustice gnawing at Joan’s mind.

As director Runge doesn’t let it rip. There’s a controlled formalness to his takes which only get a little shaky when there’s a dramatic confrontation happening. So, it’s basically up to Close and Pryce to make it a livable experience and both are simply superb. Of course, Close, with her brilliant control lets rip a pent-up angst that exposes her own misogynist-enabled subjugation. While it’s a sympathetic portrayal, it’s not a detailing of a wronged wife or talent – rather a realization of several decades of frustration masquerading as love and marriage. Jonathan Pryce is equal to the challenge and paints a consummate portrait of a man who has come to believe in his own faux achievements. This drama is endearing mainly because the two actors pour their hearts and craft into keeping us invested in their contretemps!