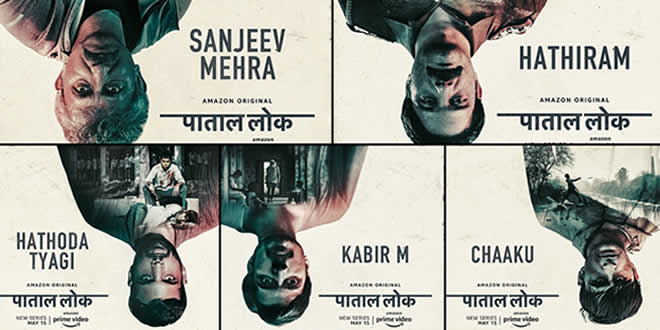 The shows is inspired by the ancient realm of Paatal Lok, Dharti and Swarg. Along with which it delves into interaction with four states of democracy.

Paatal Lok is a neo-noir web television series which will premier on Amazon Prime Video on 15 May 2020. It is produced by Clean Slate Films, Anushka Sharma’s banner. This is Prosit Roy’s second directorial venture after Pari. The teaser was released on 27 April while the trailer will be out on 5 May. A down and out cop lands the case of a lifetime when four suspects are nabbed in the assassination attempt of a prime time journalist. The case turns out to be a devious maze where nothing is what it looks like. The pursuit of it leads him to the dark netherworld – the ‘Paatal Lok’, and to shocking discoveries in the past of the four suspects.

It is a police-based crime thriller written by Sudip Sharma. The series is inspired by the traditional concepts of Svarga, Dharti and Paatal (heaven, earth and the underworld) and the four estates.

Inspector Hathi Ram Chaudhary is a cynical, washed out Delhi cop who has nothing to look forward to in his less than ordinary career. But that is until the day a high profile case lands on his table, a case too big and important for his designation. The case turns into a dark mystery thriller that leads inspector to the dark realm of underworld (Paatal Lok). Hathi Ram’s instincts tells him to investigate into the lives of the suspects. He discovers startling truths and insights that eventually help him rediscover his responsibilities as a cop, his place in the larger scheme of things and the larger meaning of life itself, Is what the show is about.

In its attempt to produce a show on par with Netflix’s Sacred Games, Amazon Prime might have unwittingly outdone itself. Paatal Lok is a stunning achievement on virtually every level, and despite all its similarities to the path-breaking Netflix series — it is also a cop show with mythological overtones — it is perhaps the most confident step in the evolution of Indian streaming since Amazon’s own Made in Heaven.

It drinks thirstily from the well of David Fincher — both in tone and its tendency to make you want to retch — but the story is so brazenly Indian that it makes you wonder if the nameless city in Fincher’s similarly seedy Se7en could be a template for your average cow-belt town.

While it offers an uncommonly assured portrayal of New Delhi in its opening couple of episodes, Paatal Lok truly comes into its own when it veers off the beaten track, takes NH-24 and enters the badlands of Uttar Pradesh. As a hinterland crime story, the show is breathtakingly realized — revealing layer underneath rotting layer, like an eight-day-old ‘pyaaz’ at a roadside dhaba.

In a neat subversion of genre tropes, the primary antagonist is apprehended by Inspector Hathi Ram Chaudhary in the very first episode. But it is only later that the policeman comes to realise that the man he thought was a common hoodlum is, in fact, the infamous serial killer Hathoda Tyagi, named after his weapon of choice.

What unfolds is a classic noir story, populated by morally reprehensible characters, in a city whose very soul is in need of saving, and corruption that goes all the way to the top. Executive producer Anushka Sharma, who has fine taste, by the way, hasn’t strayed too far from her stable of collaborators. Paatal Lok is created by her NH10 writer Sudip Sharma, co-directed by Avinash Arun and Prosit Roy (Pari), with NH10 director Navdeep Singh credited as ‘script consultant’. Singh, in particular, has shown an affinity for film noir and Westerns in the past — both are genres that Paatal Lok takes a hungry bite out of.

Episode three, for instance, is a cracking (and deeply disturbing) Wild West story, set in a Punjab village — an unexpected diversion from the gritty crime drama that the previous two episodes had teased.

As a Delhiite, born and raised, I can proudly say that Paatal Lok perfectly captures the wickedness of the Capital; the lush beauty of its NDMC avenues, the rustic charm of government quarters, and the unspoken agreement that the area on the other side of the Yamuna is generally out of bounds.

During a call with a particularly chatty food delivery executive, seeking information about the delay in my order, I learned that the service had designated several parts of New Delhi as ‘black zones’. Intrigued, I inquired further. He said that at night, the food delivery service refuses to accept orders from certain locations that could be unsafe for its riders. This corroborated the stories scores of autowallahs had told me over the years about flat-out refusing to accept fares that would take them to some areas of ‘Jamna paar’ at night.

These stories would inevitably involve carjackings and robbery at gunpoint. Sometimes, even kidnapping. But the ‘Outer Jamuna Paar’ police station is where Hathi Ram Chaudhary has been posted. And that is where our story begins.

It is a punishment posting, he’s sure, after a career filled with nothing but relegation and regret. But then, Hathoda Tyagi presents him with the biggest case of his life. Recognizing it as a sign from above, Hathi Ram jumps headfirst into the case, about the attempted assassination of a prominent journalist. 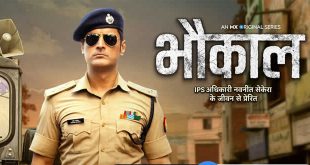