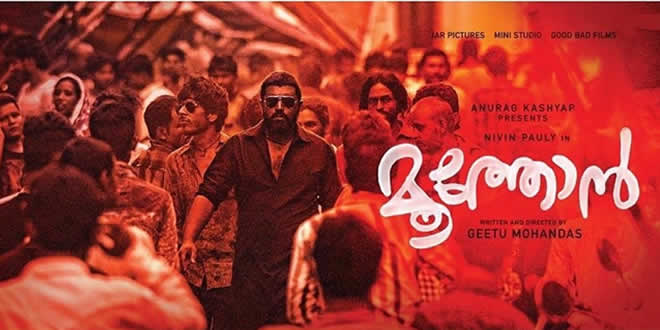 A transgender child from Lakshadweep sets off to Mumbai in pursuit of Akbar, an elder brother who left the island due to his sexual orientation.

A scene of ritualistic religious violence unfolds midway through Geetu Mohandas’ Moothon, the finest Indian film of the year. Both the eyes and the mind, enraptured by the rhythmic rage, are too distracted to pay attention to what is really happening. Underneath the scabby surface of this scene, there are signs of a tender romance.

A man named Akbar (Nivin Pauly) performs the Muslim ritual of Kuthu Ratheeb, slashing his body as if in a trance, while sombre-looking clerics recite hymns and the village folk gather around. Among the crowd, there is a man, Ameer (Roshan Mathew). Like Akbar, he also seems to be under the spell of something sublime. Their eyes lock for a moment, but neither man says a word. Ameer, as we later learn, can’t speak at all. But the scene can, and it does.

In many ways, it represents the film — epic yet intimate, gritty yet mythic. Moothon, a movie that dissects the concept of duality, is a crime drama but also a love story. Upon first observation — it deserves (and demands) many more — Moothon appears to have been stitched together from two distinctly different films. Some might even be caught off guard by its regular tonal shifts. Others might prefer one storyline over the other.

But transformation — both physical and emotional — is the central theme of Moothon. Often, these transformations are quite literal. The appearances of a couple of characters change drastically. Akbar, in his role as a mid-level goon in the Mumbai underworld, creates an armour of mass on his body that didn’t exist back when he was a mild-mannered youth. As the film navigates its own identity, it gives Akbar a new one of his own: Bhai. Without giving anything away, it is an idea that is reinforced in the film’s unforgettable final shot.

Reuniting with her husband, cinematographer Rajeev Ravi, after her stunning feature film debut Liar’s Dice, Mohandas puts her film through this transformation as well. Moothon seems to perform a quick costume change every time it switches from one timeline to the other, ditching the almost fantastical aesthetic of the opening island scenes — a mermaid makes an appearance — in favour of overwhelming bleakness in the Mumbai portions. The same camera that soared like a bird in the Lakshadweep squeezes itself into cramped chawls, as it follows the child protagonist Mulla to Mumbai.

Mulla makes the epic journey all by himself, determined to find his missing elder brother in the unforgiving metropolis. He arrives with nothing but the clothes on his back, surviving storms and seedy child molesters, and is almost immediately sent to an orphanage. Through acts of random kindness — mostly veiled — he ends up in Kamathipura, under the watchful eye of Rosy (Sobhita Dhulipala) — the proverbial hooker with a heart of gold.

Moothon has an uncommon affection for its characters — even the more unsavoury ones, like Bhai’s snivelling sidekick Salim, played by the always excellent Shashank Arora. The world that it occupies can be uncompromisingly austere at times, but because it cares for these people, it offers them moments of respite. It is unlikely that they will be able to escape their fate, as hard as they might try. Moothon is — and I’ve had weeks to think about this — a dark fairytale.

Malayalam star Nivin Pauly, in the performance of a lifetime, plays the prince. It bothers me greatly when superficial things such as no-makeup looks and nudity are described as ‘bold’ — by both the press and the audiences. To my mind, there can be no bolder performance than this. Pauly discards not only his matinee idol image, but treads into a territory that many would consider taboo. Indeed, his is the most telling transformation of them all.

It is also another reminder, in a year that seems to be filled with them, of the sheer revolution that is currently happening in Malayalam cinema. In the span of just a couple of years, we’ve seen films such as Sanal Kumar Sasidharan’s S Durga, Lijo Jose Pellissery’s Jallikkattu, and Madhu C Narayanan’s Kumbalangi Nights. In 2020 alone, we’ve had Anwar Rasheed’s tonal tightrope-walk Trance and Muhammad Musthafa’s cryptic Kappela. These are films that tackle complex ideas of religion and faith, sexuality and gender, politics and crime. They might be contemporary in their craft, but the anxieties that they address are ancient.

This second Golden Age of Malayalam movies, beyond doubt, is the most important movement Indian cinema has witnessed since Ram Gopal Varma changed the game around two decades ago in Bollywood. His former cohort, Anurag Kashyap, co-wrote Moothon.

It’s is easily the best new film on Zee5’s roster. So perhaps now the streamer can stop using deeply deceptive means to promote its own programming, like luring paying audiences onto the platform by using reviews that are really just advertisements. So here you go, Zee5; a glowing review, free of cost.