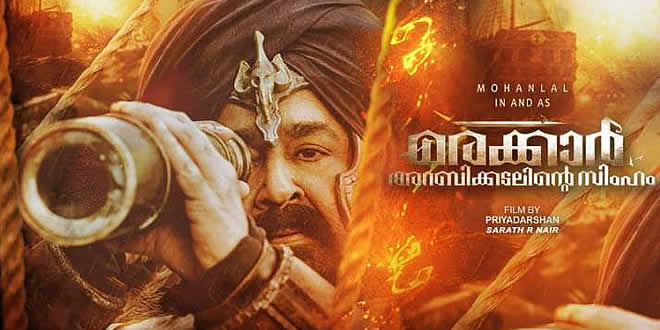 Marakkar: Arabikadalinte Simham, also known as Marakkar: Lion of the Arabian Sea, is an upcoming Indian Malayalam-language historical epic war film co-written and directed by Priyadarshan. Set in the 16th century, the film is based on the battle exploits of Kunjali Marakkar IV—the naval chieftain of the Zamorin of Calicut. Kunjali Marakkars organised the first ever naval defense of the Indian coast by defending Portuguese invasion at the Malabar Coast for almost a century. The screenplay was co-written by Ani Sasi. The film was produced by Aashirvad Cinemas with Moonshot Entertainments and Confident Group as co-producers. The film stars Mohanlal in the title role as Kunjali Marakkar IV. Principal photography began on 1 December 2018 and concluded in late March 2019, with a bulk of the film shot at Ramoji Film City, Hyderabad. It is the most expensive Malayalam film ever made, with a budget of ₹100 crore; scheduled to be released worldwide on 26 March 2020.

Marakkar: Arabikadalinte Simham was originally planned by Priyadarshan with screenwriter T. Damodaran in 1996 with Mohanlal in the title role. The idea for the film originated and was discussed in length at the sets of Mohanlal-starring Kaalapani (1996) in Kozhikode. But due to budget constraints, it did not progress, “back then, our industry [Malayalam cinema] size was very limited and most producers weren’t ready to invest hugely in such big ventures”, said Priyadarshan. But the project was still in their mind. During 2008 – 2009, director Jayaraj planned a film on Kunjali Marakkar with Mohanlal in the title role and T. P. Rajeevan was hired to write the screenplay. After extensive research and discussions it was ready to begin production and the completed screenplay was handed over to Mohanlal, who did not show interest and the project did not materialize. That screenplay was later bought by August Cinema from Rajeevan for making a separate project with different cast and crew.

In 2013, Priyadarshan revealed that in addition to a Hindi film, he is working on a Malayalam period film about Kunjali Marakkar with Mohanlal in the title role for which the research work was undergoing. On 1 November 2017, Priyadarshan confirmed to The Times of India that he would start the project after completing a Hindi film first and the ongoing research would require at least 10 more months to complete. They had to look deeper into history as what was gathered until then was information very much available to the public. It was undecided then on which Kunjali Marakkar would Mohanlal portray out of the four Marakkars. Priyadarshan said the story he would come up would be a mix of fact and fiction, as the information about many of the incidents happened during that era are unavailable. Priyadarshan zeroed in on Kunjali Marakkar IV as the protagonist as he “has the most interesting story”. The story spans from 1505 to 1601 period.

Title of the film was officially announced at a press conference held at Kochi on 28 April 2018 by Priyadarshan, Mohanlal, producer Antony Perumbavoor and co-producers Santhosh T. Kuruvilla and Roy C. J.. Budget was revealed to be ₹100 crore, making it the most-expensive film made in Malayalam cinema—produced under the company Aashirvad Cinemas, with Moonshot Entertainments and Confident Group as co-producers. It was said to begin production on 1 November 2018 on the day of Kerala Piravi.