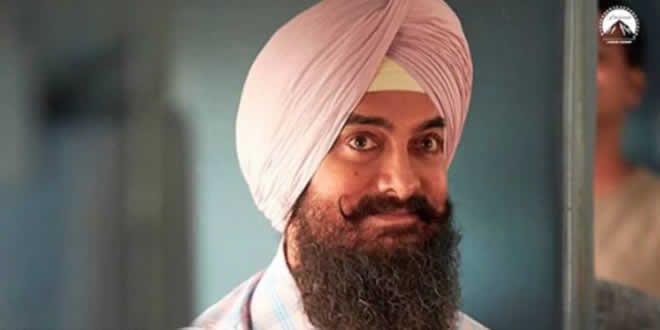 Events in India’s history unfold through the perspective of Laal Singh Chadda (Aamir Khan), a man with a low IQ.

Laal Singh Chaddha is an upcoming Indian Hindi-language comedy-drama film directed by Advait Chandan and produced by Aamir Khan and Kiran Rao. It is loosely adapted from the American drama Forrest Gump (1994) and traces historical things that were present in the former. The film stars Aamir Khan as the title character, while Kareena Kapoor portrays his love interest. Mona Singh and Vijay Sethupathi play supporting roles.

The official announcement for the film was made on Khan’s 54th birthday (16 March 2019), and it was also confirmed that it will be shot in more than 100 locations in India. Principal photography commenced in Chandigarh on 31 October 2019, with Khan’s mother Zeenat Hussain giving muhurat clap. It is scheduled to be theatrically released in India on Christmas 2020.

In March 2019, Bollywood actor and filmmaker Aamir Khan announced he will produce and star in Laal Singh Chaddha, an Indian remake of Tom Hanks‘s 1994 American film Forrest Gump, with Advait Chandan as director. Laal Singh Chaddha is co-produced by Viacom18 Motion Pictures. The film was also announced to trace historical things that were in the original version Forrest Gump. Kareena Kapoor joined the film in June 2019, and it marked the third time she is working with Khan following 3 Idiots (2009) and Talaash: The Answer Lies Within (2012).

It was announced in September 2019 that film will be shot in more than 100 Indian locations. The principal photography commenced in Chandigarh on 31 October 2019 with Khan filming his scenes and Kapoor joined him the following day. The looks from the film sets were leaked in mid-November and the first schedule ended on 22 November 2019. Tamil actor Vijay Sethupathi as well as Bollywood actress Mona Singh, who had also played Kapoor’s sister in 3 Idiots, were added to the film cast too. A romantic track of the film picturized on Khan and Kapoor was wrapped up on 28 November.

The second schedule begun in Kolkata on 5 December 2019. The images of Khan from the film sets in Kolkata were leaked on 9 December 2019. On 12 December, he flew to Kerala for the second portion of that schedule. His photos and videos from Changanassery, Paravur Thekkumbhagam near Kollam city and Kappil, Thiruvananthapuram district from Kerala went viral on 16 December. The second schedule was also filmed in Jaisalmer.

The third schedule of the film started on 21 December in Goa and later on moved to Himachal Pradesh on 5 January 2020, which eventually completed in late January.

On 6 November 2019, official logo of the film was launched by Viacom18 Motion Pictures.

On his social media account, Aamir Khan unveiled the first official theatrical poster of his character on 18 November 2019 online.

The film will be theatrically released worldwide on Christmas 2020.

This films soundtrack is composed by Pritam and the lyrics are written by Amitabh Bhattacharya. The music rights are bagged by Sony Music India.