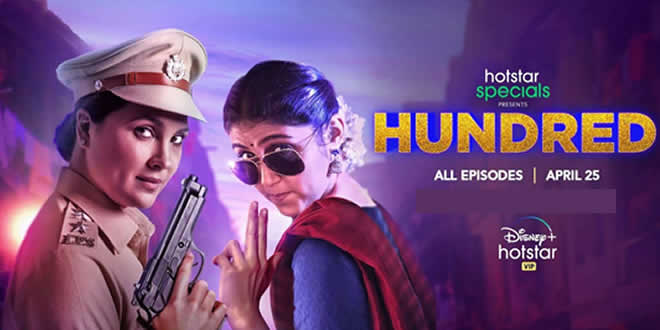 An unapologetic and frustrated ACP teams up with an honest civil worker who teams up to accomplish their personal objectives.

Netra Patil (Rajguru) learns that she has only hundred days left to live because of her terminal illness meets an ambitious ACP Saumya Shukla (Dutta) and becomes an undercover agent. The duo tries to accomplish their goals in the next hundred days.

Disney+ Hotstar recently debuted their latest series which features Lara Dutta and Rinku Rajguru in the lead roles. It is titled Hundred and one might easily get curious as to why a colourful and uplifting looking show has been given this title. It is because of Rinku Rajguru’s character, Netra Patil, who is told that has only a hundred days to live after getting diagnosed with a brain tumour.

When Rinku Rajguru’s character is told that she only has a hundred days to live, she sets out to live her best life. That is when she comes across Lara Dutta’s character ACP Saumya, a hard-knock and strong cop who is still subjected to sexism by her seniors on the taskforce. Without getting into spoiler territory, the two women team-up to fulfill their respective agendas and deliver an entertaining series.

The first episode of Hundred sets up the character and the plots very well. No character of the series feels forced as almost every side character ahs their agenda to fulfill in the show. Each episode ends with a cliffhanger which makes it an easy binge-watch for audience members. Besides this, watching Lara Dutta and Rinku Rajguru in a new avatar can also be refreshing for many fans.

The show provides with a substantial amount of thrill along with a few twists and turns which can make for an entertaining watch for the weekend. Besides the lead cast of Lara Dutta and Rinku Rajguru, Hundred also features Karan Wahi. Besides this, supporting actors include Sudhanshu Pandey, Parmeet Sethi, Makarand Deshpande and Arun Nalawade.