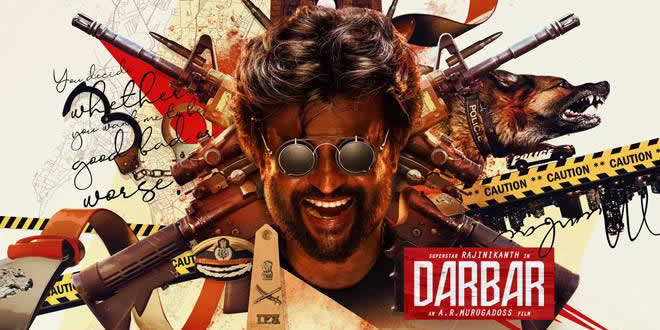 Darbar is an upcoming 2020 Indian Tamil-language action thriller film written and directed by AR Murugadoss and produced by Allirajah Subaskaran under the banner of Lyca Productions. The film stars Rajinikanth, Nayanthara, Nivetha Thomas, and Sunil Shetty in the lead roles. The music for the film composed by Anirudh Ravichander while cinematography and editing are handled by Santhosh Sivan and Sreekar Prasad, respectively. The film is scheduled to be released on 10 January 2020, coinciding with Thai Pongal.

Production of the film began with the working title Thalaivar 167. Lyca Productions announced that they would collaborate with Rajinikanth again after their previous collaboration 2.0 with A. R. Murugadoss directing the film. Principal photography began on 10 April 2019 in Mumbai. Filming began on 8th April 2019, with a first look poster released by Lyca Productions on Twitter and Facebook the same day.

Murugadoss had on 9 April shared the first look of Darbar which marks his maiden collaboration with Rajinikanth. The poster was decked up with police instruments and equipment, with the punchline, “You decide whether you want me to be good, bad or worse.”

Sunil Shetty was cast for the lead antagonist role, who appears in his second Tamil film after 12B (2001).

The director further writes that this action thriller will be the actor’s 167th film. Rajinikanth has taken up the role of a cop after almost 27 years, his last police role being the 1992 film Pandiyan.

Anirudh Ravichander will compose the music whereas Santhosh Sivan will serve as the cinematographer. Sreekar Prasad will be editing the film. The second look posters starring Superstar Rajinikanth with two different shades were released by the director AR Murugadoss by his official twitter handle for the fans art.

The film’s soundtrack and score was composed by Anirudh Ravichander, marking his second collaboration with actor Rajinikanth after Petta and also with director A. R. Murugadoss after Kaththi. An instrumental theme song for the film titled “Thalaivar Theme”, that accompanies with the motion poster was released on 7 November 2019, the same day that the motion poster was released.

While the album would be released under Rubax audio label with Divo as their digital partner, the rights to stream the album were secured by Gaana through their online music streaming platform.

The film’s first single, “Chumma Kizhi”, with lyrics by Vivek and sung by S. P. Balasubrahmanyam, was released on 27 November 2019.

The film’s album was launched on 7 December 2019 at Jawaharlal Nehru Indoor Stadium, Chennai. The full album was simultaneously made available to stream via Gaana’s online music streaming platform, on the same day itself.

The film is scheduled for a worldwide release in Tamil, Telugu, Malayalam and Hindi on 10 January 2020, coinciding with Thai Pongal.

In the films of AR Murugadoss, justice isn’t always delivered by upholding the law of the land. Be it in Ramana or Thuppakki or Kaththi, his protagonists have to break the law to ensure justice is served. And that is what happens in Darbar, where an angry cop goes on a murderous rampage to take down a most-wanted criminal. Right in the opening scenes, the director establishes that his protagonist Aaditya Arunasalam (Rajinikanth), a top cop who has been deputed to Mumbai to tackle the drug menace in the city, isn’t someone who goes by the rule book. In fact, we see him threatening and roughing up the members of the Human Rights Commission who question him about his rule-breaking (The film tries to project Arunasalam as a mentally disturbed person to justify his extrajudicial killings).

In the course of one of his operations, Arunasalam nabs Ajay Malhotra (Prateik Babbar), the son of Vijay Malhotra (Nawab Shah), a top businessman, who happens to be the chief drug supplier in the city. But when Ajay is eliminated, Hari Chopra (Suniel Shetty), a dreaded gangster who turned the police force into a laughing stock 27 years earlier, returns to the country to settle what has become a personal score by targeting Arunasalam and his daughter Valli (Nivetha Thomas).

Taking his lead from Karthik Subbaraj’s Petta, Murugadoss turns Darbar into a celebration of Rajinikanth, the Superstar. Though he doesn’t turn this film into a greatest hits collection like the former film, Murugadoss exploits the charisma and super stardom of Rajinikanth and gives us a genre film – a cop film – that is a fairly engaging commercial cocktail of action and drama hemmed by uneven writing. The film’s strongest selling point are the father-daughter scenes between Rajinikanth and Nivetha Thomas, whose on screen camaraderie, makes this relationship endearing. Murugadoss also gives us a truly heartbreaking moment and Nivetha Thomas is fantastic in this portion.

Darbar is also alert to its hero’s age in real life. This is why the romantic track, between Arunasalam and Lily (Nayanthara, in a character that is simply a showpiece), is enjoyable. It is filled with Rajinikanth’s trademark playfulness and Yogi Babu, teaming up with the Superstar for the first time as the comic sidekick, clicks. Even as we marvel at the miraculous youthfulness of Rajinikanth in these portions (a splendid job by the cinematography, makeup and costume departments), we get a scene where a character remarks at the age difference between the two. The dignified manner in which this scene addresses this issue ensures that fans don’t take it as an insult to their idol. Later, Murugadoss even gets Rajini to remark on his age: “Nambaravanukku vayasu verum number dhaan” (“Age is just a number to one with confidence”).

But while the film has a solid middle section, filled with emotional and whistle-worthy moments, including a training montage where we get to see Rajini flexing his muscles, and a fight sequence set in a railway station (that recalls the climax stunt of Dhool), the first and third acts are underwhelming. While the former feels tentative (this film has the weakest intro scene and song for Rajinikanth in a while), the latter is rushed. The fact that many of the Bollywood actors seem to be speaking in Hindi, leading to lack of lip-sync also alienates us from being immersed in the narrative.

And perhaps because his villainy is often offscreen, Suniel Shetty’s Hari Chopra doesn’t come across as a powerful antagonist despite being built up as one. Yes, he causes numerous casualties, but still, the lack of a solid confrontation scene between him and Arunasalam makes it difficult for us to buy him as a deadly foe. This is why the climax, rather than giving us a high, feels meh. But if this minor disappointment is washed away, it is only because of how Rajinikanth plays this character. While there is the cockiness of Alex Pandian (Murgadoss’s inspiration for this character), there is also vulnerability. And his infectious energy and inimitable style keep us rooting (and hooting) for his character.