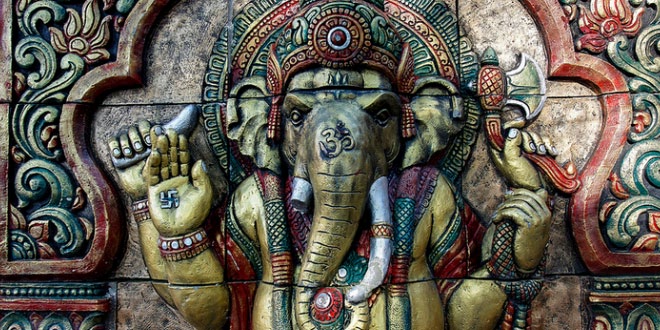 Why Lord Ganesha Has Only One Tusk? Story – 1

Why Lord Ganesha Has Only One Tusk? Here are two stories of how Ganesha lost one of his tusks. Lord Ganesha loved to eat. One evening, having stuffed himself to capacity, he decided to take a post-prandial ride on his favored mount, Mooshika, a rat or shrew. Along the moonlit road they chanced upon a large snake and the startled rat bolted, throwing the fat god. Lord Ganesha fell heavily; he hit the ground so hard that his stomach burst open. Gathering up the remains of his self-esteem, his ample guts and the snake, Lord Ganesha wittily used the reptile as a belt and tied himself up together again. Howls of derision shattered the peaceful scene; it was the moon who had witnessed the whole incident with great relish. Lord Ganesha lost his temper and angrily looked about for something to throw at his tormentor. Finding nothing suitable, he ripped off one of his own tusks and hurled it at the moon. He added a vindictive curse that every so often the moon would lose its power of giving light.

Why Lord Ganesha Has Only One Tusk? Another explanation of his missing tusk occurs in the first part of the epic poem Mahabharata. It is written that the sage Vyasa asked Ganesha to transcribe the poem as he dictated it to him. Ganesha agreed, but only on the condition that Vyasa recite the poem uninterruptedly, without pausing. The sage, in his turn, posed the condition that Ganesha would not only have to write, but would have to understand everything that he heard before writing it down. In this way, Vyasa might recuperate a bit from his continuous talking by simply reciting a difficult verse which Ganesha could not understand. The dictation began, but in the rush of writing Ganesha’s pen broke. He broke off a tusk and used it as a pen so that the transcription could proceed without interruption, permitting him to keep his word.

Another legend about Lord Ganesha having preference over all other gods establishes his sharpness of intellect. There was a keen competition amongst all gods to gain the first place of worship amongst the laity. It was decided that the god who would return first after traversing the whole universe shall be declared the winner. All gods and goddesses ran on their fast vehicles. Lord Ganesha with his pot-bellied body and mouse’s vehicle could never hope to compete. He took a round of his parents, Shiva and Parvati, and just sat there at the starting point. He was declared the winner because one who goes round his parents and touches their feet traverses the whole universe.