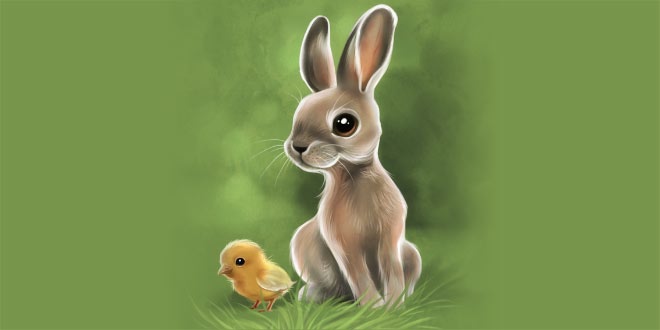 On Easter Sunday, many children wake up to find that the Easter Bunny has left them baskets of candy. He has also hidden the eggs that they decorated earlier that week. Children hunt for the eggs all around the house. Neighborhoods and organizations hold Easter egg hunts, and the child who finds the most eggs wins a prize.

The Easter Bunny is a rabbit-spirit. Long ago, he was called the “Easter Hare”, hares and rabbits have frequent multiple births so they became a symbol of fertility. The custom of an Easter egg hunt began because children believed that hares laid eggs in the grass. The Romans believed that “All life comes from an egg.” Christians consider eggs to be “the seed of life” and so they are symbolic of the resurrection of Jesus Christ.

Why we dye, or color, and decorate eggs is not certain. In ancient Egypt, Greece, Rome and Persia eggs were dyed for spring festivals. In medieval Europe, beautifully decorated eggs were given as gifts.

Who is the Easter Bunny?:

The Easter Bunny (also called the Easter Rabbit or Easter Hare) is a folkloric figure and symbol of Easter, depicted as a rabbit bringing Easter eggs. Originating among German Lutherans, the “Easter Hare” originally played the role of a judge, evaluating whether children were good or disobedient in behavior at the start of the season of Eastertide. The Easter Bunny is sometimes depicted with clothes. In legend, the creature carries colored eggs in his basket, candy, and sometimes also toys to the homes of children, and as such shows similarities to Santa Claus or the Christkind, as they both bring gifts to children on the night before their respective holidays. The custom was first mentioned in Georg Franck von Franckenau’s De ovis paschalibus (‘About Easter Eggs’) in 1682, referring to a German tradition of an Easter Hare bringing Easter eggs for the children.

Previous What is the mystery of Easter Island?
Next Ikko~Mikke: 2020 Punjabi Rom-Com Drama