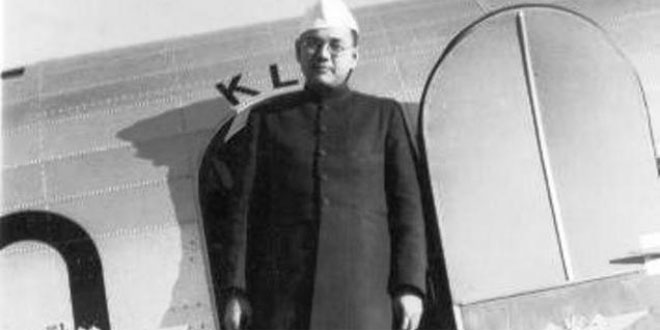 Where is Netaji Subhash Chandra Bose? The alleged death of Subhash Chandra Bose, the supreme commander of Azad Hind Fauj and Free India Legion in a plane crash in Taiwan on August 18, 1945, has long been the subject of dispute. The third Indian commission that was appointed for inquiring into this confirmed in its report tabled in parliament in May 2006, that Bose’s death was staged to facilitate an escape to the USSR.

Subhash Chandra Bose, a prominent leader of the Indian independence movement against the British Raj in India and a general of the Imperial Japanese army Tsunamasa Shidei were reported to be flying to Tokyo, Japan when the alleged plane crash occurred at Matsuyama aerodrome (now Songshan Airport) in Taipei, northern Formosa (now the Republic of China, or Taiwan). The news was withheld by Japanese government for five days before it was announced by Japanese news agency Domei. The Allied forces took the Japanese news as a ploy. The then Viceroy of India, Field Marshal Archibald Wavell, is reported to have noted in his diary that “I wonder if the Japanese announcement of Subhash Chandra Bose’s death in an air-crash is true. I suspect it very much, it is just what should be given out if he meant to go underground.”

The matter was looked into by several allied intelligence teams and soon holes in the Japanese version became apparent.

The findings of the intelligence teams seem to have not confirmed the Japanese announcement. For as late as October 1946, the Government of British India refused to confirm the death of Bose.

However, it has also been alleged at various times that the Indian government and political leadership was aware that Bose may have been alive, and according to one theory, in captivity in Soviet Union, but chose to ignore or actively collaborate to suppress this information after Independence.