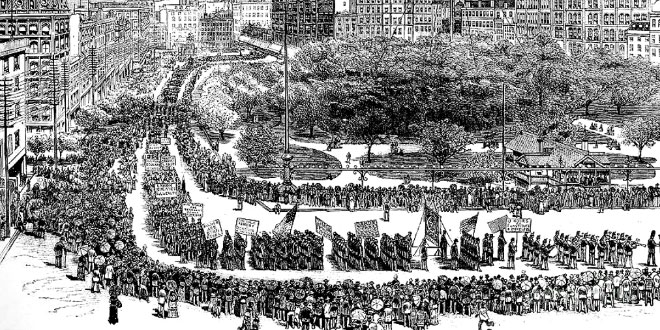 The first Labor Day parade in the United States was held in New York City on Tuesday, September 5, 1882. More than 10,000 workers marched. It was organized by the Central Labor Union, a body representing 60 unions and over 80,000 people. The CLU was a secret lodge of the Knights of Labor, the major national union of the time.

The huge procession began with 400 members of Bricklayers Union No. 6, all dressed in white aprons. They were followed by a band, and then the members of the Manufacturing Jewelers union. The jewelers marched four abreast, wearing derby hats and dark suits with buttonhole bouquets. They all carried canes resting on their shoulders (similar to the way infantry officers carry swords when on parade.)

As the day went on, the parade included contingents from the Manufacturing Shoemakers Union No. 1 (wearing blue badges), and an especially well-received contingent from the “Big 6” – Typographical Union No. 6 – whose 700-strong delegation marched with military precision. (They had practiced beforehand.) The Friendly Society of Operative Masons marched with their band. They were followed by 250 members of the Clothing Cutters Benevolent and Protective Union, the Dress and Cloak Makers Union, the Decorative Masons, and the Bureau of United Carpenters (who marched with a decorated wagon).