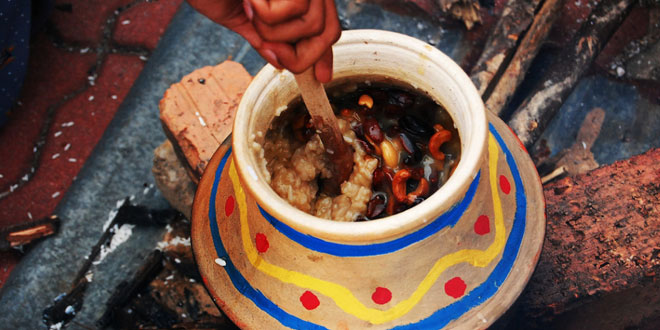 Pongal festival is celebrated for four continuous days beginning from the last day of Tamil month of Maargazhi (December-January) and lasting upto the third day of Thai. Pongal is celebrated in the month of January after the winter solstice.

The date of Pongal usually remains same as it is reckoned according to the solar calendar that is more accurate than the lunar calendar. For Hindus the date of Pongal is extremely auspicious as it marks the sun’s entry into Makaram Rashi or the Tropic of Capricorn from the Tropic of Cancer. On this day sun begins its journey northwards (Uttarayan) for a period of six months as opposed to southwards (Dakshinayan) movement. It is this fascinating and auspicious astronomical event that is celebrated as Pongal in South India and Makar Sankranti in North and Central India.

Pongal: Reaping of paddy is done. Using the new rice, the recipe “Pongal” is made and offered to God. The sun God moves in chariot driven by seven horses. A picture of the chariot is drawn in an open space when the sun arrives. A small sun is drawn at the center of the chariot. People place turmeric sprigs and sugarcane and puja is done onto the chariot. Then the dishes are offered to God. Once the uja is over, everyone in the house takes a small amount of Pongal and sprinkles all over the house, saying “Pongalo Pongal”. This is done as a prayer to God to bless their houses.