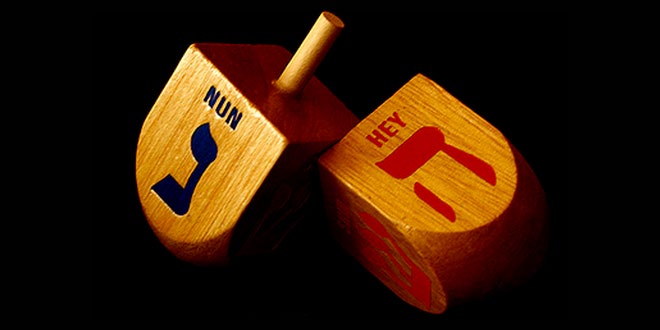 What is the meaning of Hebrew Letters on a Dreidel?

A dreidel has one Hebrew letter on each side. Outside of Israel, those letters are: נ (Nun), ג (Gimmel), ה (Hay) and ש (Shin), which stand for the Hebrew phrase “Nes Gadol Haya Sham.” This phrase means “A great miracle happened there [in Israel].”

After the State of Israel was founded in 1948 the Hebrew letters were changed for dreidels used in Israel. They became: נ (Nun), ג (Gimmel), ה (Hay) and פ (Pey), which stand for the Hebrew phrase “Nes Gadol Haya Po.” This means “A great miracle happened here.”

The miracle referred to in both versions of the Hebrew phrase is the miracle of the Hanukkah oil, which lasted for eight days instead of one.

According to most scholars, the dreidel developed from an Irish or English top introduced into Germany known as a teetotum, which was popular around Christmas time and dates back to ancient Greek and Roman times. The teetotum was inscribed with letters denoting the Latin words for “nothing,” “half,” “everything” and “put in.” In German this came to be called a trendel, with German letters for the same concepts. Adapted to the Hebrew alphabet when Jews adopted the game, these letters were replaced by shin (=shtel arayn, put in); nun (=nit, not, i.e., nothing); gimel (=gants, whole/everything); and he (=halb, half). The letters served as a means to recalling the rules of the game.