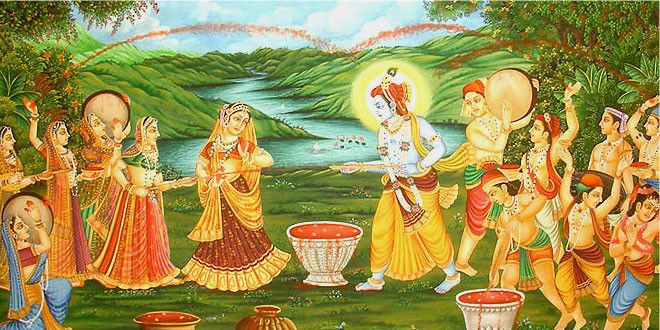 What is the Holi Legend of Radha Krishna?

Young Krishna is known to be very playful and mischievous. The story goes that as a child, Krishna was extremely jealous of Radha’s fair complexion since he himself was very dark.

One day, Krishna complained to his mother Yashoda about the injustice of nature which made Radha so fair and he so dark. To pacify the crying young Krishna, the doting mother asked him to go and colour Radha’s face in whichever colour he wanted. In a mischievous mood, naughty Krishna heeded the advice of mother Yashoda and applied colour on her beloved Radha’s face; Making her one like himself.

Well, there is also a legend to explain Krishna’s dark complexion. It so happened that once a demon attempted to kill infant Krishna by giving him poisoned milk. Because of which Krishna turned blue. But Krishna did not die and the demon shriveled up into ashes. The beautiful scene of Krishna’s prank in which he played colour with Radha and other gopis has been made alive in myriad forms in a number of paintings and murals.

Prahlad and Holika: In Vaishnava theology, Hiranyakaship was the king of demons, and had received the boon of immortality from Lord Brahma. As his power and arrogance grew, he began objecting to people’s belief in the divine power and demanded that they worship him instead.

However, Hiranyakaship’s son Prahlad was a devotee of Lord Vishnu. When he failed to destroy his son’s beliefs despite placing him in near fatal situations, he ordered young Prahlad to sit on a pyre in his sister Holika’s lap. Holika was blessed with a shawl, which would prevent the fire from harming her.

Prahlad happily followed his father’s orders and prayed to the lord to save him. As the flames grew, to the spectators’ amazement, the shawl flew from Holika to Prahlad. From that day on, the burning of Holika is celebrated as Holi.