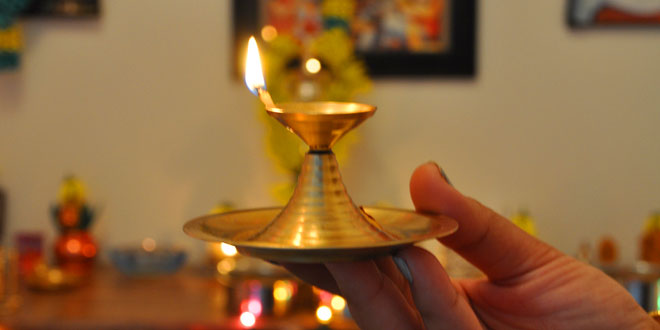 What is Surya Pongal? The second day is dedicated to Lord Surya, the Sun God, who is offered boiled milk and jaggery.

A plank is placed on the ground, a large image of the Sun God is sketched on it and Kolam designs are drawn around it. This icon of the Sun God is worshiped for divine benediction as the new month of ‘Thai’ begins.

Women wake early on this day to create elaborate ‘kolam’ on the grounds in front of their doorway or home. Kolam is created with colored rice flour placed on the ground carefully by using one’s hand. The women take several hours to finish the kolum. On this day the new rice is collected and cooked in pots until they over flow. It is this overflowing which means Pongal. This overflowing of rice is a joyous occasion, and the children and adults as well will shout out ‘Pongal-o-Pongal!’

The Sun God is offered boiled milk and jaggery. A plank is placed on the ground, a large image of the Sun God is sketched on it and Kolam designs are drawn around it. In the centre of the plank is drawn a large figure of the Sun God with his effulgent rays. The “Puja” of the Sun God starts after the auspicious moment of the birth of the new month Thai. Prayers are rendered to the Sun God to seek his benedictions.

The Sun God is given pride of place during Pongal. In the villages, people gather in the courtyard and prepare the Pongal in the open. The pot in which the Pongal is cooked is decorated with flowers, sugarcane pieces, turmeric plant etc. The first offering is made to the Sun.

The rice is cooked and prepared as a dish called Pongal which is rice with dhal and sugar. This Pongal variety is called venpongal, ven meaning white. Another variety is also prepared with dhal and jaggery (sweet), called chakra pongal chakrai meaning sweet. To accompany the venpongal, people eat brinjal (eggplant) sambar (stew), vadai,idli and spicy accompaniments.

Sweets, puddings, cooked rice or ‘Sarkarai Pongal’ are prepared on this day. On all the three days of Bhogi, Pongal and Maattu Pongal, women adorn the entrance of their houses with colorful kolams. Large patterns, decorated with colorful flowers and powders are drawn, crowding the entire street.