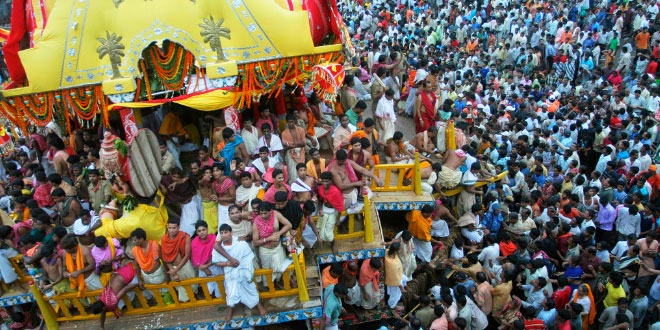 The Ratha Yatra or Car Festival Of Lord Jagannath at Puri is the most famous and the most spectacular festival which attracts countless pilgrims from all over India and also from abroad. This festival takes place in Asadha Sukla Dwitiya when the images of Lord Jagannath, Lord Balabhadra, Devi Subhadra and Sudarshana are taken in a grand procession on three separate chariots along the Badadanda from Shrimandira to Gundicha Mandira.

The whole cycle of the Car Festival consists of the following:

As stated earlier, the Ratha Yatra takes place in the Second day of bright fortnight in the month of Asadha. But the actual preparation starts from the Magha Saptami with the cutting of trees in distant Daspalla and nearby areas for providing the wood necessary for construction of chariots. On the third day of the bright fortnight of Baisakh, i.e. Akshaya Trutiya, starts the auspicious construction of chariots on the Grand Road of Puri. It is indeed a difficult task to construct the Chariots within the short span of 58 days.

Snana Yatra or Bathing Ceremony of Lord Jagannath is held on the full moon day of Jyestha. On this auspicious occasion, the three Deities move in a colourful procession to a platform known as Snanavedi (bathing platforms). Here they bath with one hundred and eight pitchers of perfumed water drawn from a temple well once in a year. After the ritual bath, the Deities assume the special elephant form which is otherwise known as Hati Vesha.

After Snana Yatra, the deities are supposed to fall ill (fever) and do not return to their pedestal. They stay away from the public view for a period of fifteen days. This is known as Anasara. During this period, the deities get fresh coat of paining which gets washed out on the day of Snana Yatra. The deities appear in their Nabayaubana Vesha literally a renewed youth, on the New Moon Day of the month of Asadha.

Finally comes the Ratha Yatra, on the second day of the bright fortnight of Asadha. On this occasion Four images of Jagannath, Balabhadra, Subhadra and Sudarshana are dragged forth in a grand procession by three separate chariots along the Badadanda from Shri Mandir to Gundicha Mandir. The spectacular procession by which deities are brought on the chariot is knwon as Pahandi. It is the most colourful show of the car Festival held tightly by the arms by Daitapatis and pulled from behind and the front alternatively by the ropes tied firmly to the body, each image is made to jump from place to place and advance. It worthwhile to mention here that no such emotion are evoked among the crowds like Jagannath. When Balabhadra is carried in Pahandi to the Chariot, Subhadra and Sudarshana are just carried by the Daitapatis.

After all the deities are seared in their respective chariots starts the Chhera Pahanra. The Gajapati King of Puri comes in a decorated Palanquin and climbs the Chariots for ceremonial sweeping of floors by a golden broom. This is known as Chhera Pahanra. It presupposes that no labour is detestable if it is required for social purpose.

Then comes the most exciting part of Ratha Yatra is the pulling of chariots by thousands of people without distinction of caste, colour, sex or religion. First moves the Chariot of Balabhadra, next Subhadra’s and finally Jagannath’s Chariot. Usually they reach the Gundicha temple, the same evening. The deities enter the Gundicha Temple on the next day in the usual Pahandi style and stay their for seven days.

Goddess Laxmi gets angry for being not allowed to go along with Lord Jagannath and proceeds to the Gundicha Temple to meet Lord Jagannath on the Hera Panchami Day, the fifth day from the Ratha Yatra. After having a stealthy look at Her Lord, She returns to Shri Mandir, damaging a part of Jagannath’s Chariot in anger and disgust.

As stated earlier, the Deities stay at Gundicha Temple for a period of seven days. Then starts their return journey or Bahuda Yatra. On His way back, Jagannath stopped for few minutes at Mausima Temple or the temple of aunt to take His favourite rice cake or Poda Pitha. On the next day, i.e. Bada Ekadasi, the Deities are attired in costumes of Glittering gold and are worshipped by thousand of devotees. This form of the deities is known as Suna Vesha.

One day after Ekadasi, Lord Jagannath, Lord Balabhadra, Goddess Subhadra and Sudarshana return to the temple with the usual fanfare and in the Pahandi Style. Thus ends the Ratha Yatra, the grand festival of the Chariots.

It will not be out of place to mention something about the Chariots that the Gods Mount. Without a strong determination, it is indeed very difficult to construct these Chariots within a short span of 58 days.

Lord Jagannath’s Chariot is known as Nandighosa. It has a height of 45 feet. It has sixteen wheels, each of seven feet diameter and is decked with red and yellow coverings of cloth. The Sarathi or the Charioteer made of wood is known as Daruka. The Four horses attached to the Chariot are known as Samkha, Rochica, Mochica and Jwalani. They are white in colour. The name of Ratha Pala is Shri Nrusingha. At the crest of the Chariot are the wheel and the image of Garuda. The name of the flag of Nandighosa is Trailakyamohini. It may be pointed out that 832 pieces of wood are used in Nandighosa. Nandighosa is draped in yellow cloth.

The Chariot of Lord Balabhadra, called Taladwhaja, has fourteen wheel each of seven feet diameter with red and blue cloth. It has a height of forty-four feet. The name of the Sarathi is Sudyaumna. The four wooden black horses attached to the Chariot bear the names of Sthira, Dhruti, Sthiti and Siddha. The Rathapala is Ananata and 763 pieces of wood are used in this Chariot. The name of the flag of the Chariot is Unnani.

The Chariot of the Subhadra is known as Darpadalana, height is forty three feet with twelve wheels, each of seven feet diameter. This Chariot is covered with red and black cloth. The name of Sarathi is Arjuna. Four wooden horses fixed to the Chariot as known as Prajna, Anuja, Ghora and Aghora. The Rathapalika is Vana Durga. 539 pieces of wood are used in this Chariot and the name of the Chariot is Nadambika.

The Ratha Yatra is being conducted at Puri since long ago. It is indeed very difficult to say since what date it has started. The festival will continue so long as the Sanatana Dharma exists on the earth.

Previous Which is the Chariot Festival of India?
Next Lata Mangeshkar Biography For Students