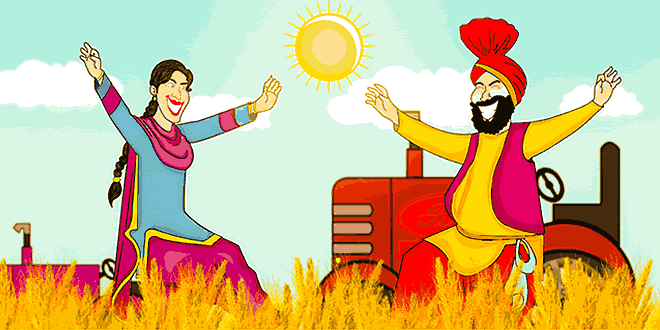 Baisakhi Day or Vaisakhi Day of March 30th, 1699 is of significant importance for the Sikhs. It was on this day that Guru Gobind Singh – the Tenth Guru of the Sikhs founded the Akal Khalsa (Community of the Pure) at a ceremony organized at Keshgarh Sahib near Anandpur Sahib. The Akal Khalsa played a significant role in resistance against Mughal rule. Every year on April 13 Sikhs celebrate with pomp and gusto the birth of the Khalsa Panth.

In the year 1667 Aurungzeb, the Mughal Emperor installed himself as the Emperor of India after annihilating almost all his family opposition. Immediately after gaining power, Aurungzeb embarked on a policy of religious persecution and started the process of Islamization of India. Brahmins became the prime targets of Aurungzeb in this regard as his clerics made him convinced that once the Brahmins accepted Islam the others would follow. Pursuing his agenda, Aurungzeb levied unethical religious taxes against Hindus and shut their temples and places of learning.

The Brahmins, particularly those of Kashmir, desperately felt the need for a dynamic leadership to fight this subversion by the Mughal Emperor. They approached Guru Tegh Bahadur (1621-1675), the ninth in the line of Sikh Gurus, who was on the throne of the Sikh religion and asked him for guidance on the issue.

During this meeting, Guru Tegh Bahadur’s nine-year-old son, Gobind Rai, was sitting beside him. Finding Guru Tegh Bahadur under deep contemplation, the young son asked the reason of his repose. The Guru explained the situation to the child and said the world is aggrieved by oppression and no brave man had yet come forward to willingly sacrifice his life to free the earth from the burden of Aurangzeb’s persecution of Hindus. To this young Gobind Rai replied, “For that purpose who is more worthy than thou who art at once generous and brave.” Pleased with his son’s reply, Guru Tegh Bahadur entrusted the Guruship to Gobind Rai and proceeded towards Delhi, the seat of the Mughal Empire.

Just as they reached Delhi, the mighty Aurangzeb imprisoned the Guru and his loyal attendants. Foreseeing his ecclesiastic journey during imprisonment, Guru Tegh Bahadur thought of testing his son’s courage and capability to carry on the Guru’s mission. In a letter to Gobind Rai, the Guru wrote, “My strength is exhausted, I am in chains and I can make not any efforts. Says Nanak, God alone is now my refuge. He will help me as He did his Saints.” In his reply young Guru Gobind Rai wrote, “I have regained my Power, my bonds are broken and all options are open unto me. Nanak, everything is in Thine hands. It is only Thou who can assist Thyself.”

Later, Guru Tegh Bahadur was martyred in Delhi in the presence of hundreds of people. The executioner abandoned the Guru’s body in the open. But no one dared to come forward to claim the body to perform religious rites. Even the ardent disciples withdrew unrecognized. It was only when the stormy weather occurred, that two persons took advantage of the situation and covertly took the body of Guru Tegh Bahadur for cremation. This cowardice of Sikhs incited in Gobind Rai an urge to endow his Sikhs with a distinct identity.

With the desire to instill courage and strength to sacrifice among his fellow men, Gobind Rai became the tenth Sikh Guru. At the age of 33, Guru Gobind had Divine inspiration to actuate his designs. The Guru found the occasion of Baisakhi could serve his purpose, as every year thousands of devotees would come to Anandpur at the time of Baisakhi (springtime) to pay their obeisance and seek the Guru’s blessings. Early in the year 1699, months before Baisakhi Day, Guru Gobind Rai sent special edicts to congregates far and wide that that year the Baisakhi was going to be a unique affair. He asked them not to cut any of their hair and to come with unshorn hair under their turbans and chunis. Besides, men were asked to come with full beards.

At the call of the Guru, thousands of people gathered at the Anandpur Sahib, the famous Golden Temple of Amritsar, India on the Vaisakhi Day, March 30, 1699. To instill courage in the fellow men, Guru Gobind made a powerful oration and revealed to them his divine mission of restoring amongst Sikhs and preserving the Sikh religion. At the end of his speech, the Guru flashed his unsheathed sword and said that every great deed was preceded by equally great sacrifice and demanded one head for oblation. To the Guru’s call, Daya Ram, a Khatri of Lahore offered himself. The Guru took him inside a tent. A little later he reappeared with his sword dripping with blood, and asked for another head. One by one four more earnest devotees – Daram Das – a Jat of Delhi, Mohkam Chand – a washerman of Dwarka (Gujarat), Himmat – a cook of Jagannath (Orissa) and Sahib Chand – a barber of Bidar (Karnataka) offered their heads. Every time the Guru took a person inside the tent, he came out with a bloodied sword in his hand.

Astonished with their Guru’s behavior and believing him to have gone berserk, people started to disperse. Shortly after, Guru Gobind emerged with all five men dressed piously in white. He baptized the five in a new and unique ceremony called ‘Khande di Pahul’ (the double-edged Sword Amrit), what Sikhs today call Amrit. After this, the Guru asked the five baptized Sikhs to baptize him as well. They were then knighted as Singhs, as the Five beloved ones, the first members of the new community of equals, to be called the Khalsa, meaning “pure”. Guru Gobind proclaimed that the Panj Pyare or the Five Beloved Ones would be the embodiment of the Guru himself, “Where there are Panj Pyare, there am I. When the Five meet, they are the holiest of the holy.”

These “saint soldiers” were to dedicate their lives to the service of others and the pursuit of justice for people of all faiths. The Guru also said whenever and wherever the five baptized or Amritdhari Sikhs comes together, the Guru would be present. All those who receive Amrit from five baptized Sikhs will be infused with the spirit of courage and strength to sacrifice. Thus with these principles, Guru Gobind established Panth Khalsa, the Order of the Pure Ones.

The Guru also gave his new Khalsa a unique, indisputable, and distinct identity. The Guru gave the gift of bana, the distinctive Sikh clothing and headwear. He also offered five emblems of purity and courage. These symbols, worn by all baptized Sikhs of both sexes, are popularly known today as Five Ks:

This act of total surrender of one’s life to the service of the AKAL (God), the Timeless One, and at the feet of Guru Gobind Singh created the Sikh religion. For many centuries after that, the first male child of all families of Hindus in Punjab was ordained as a Sikh.

Previous What is Baisakhi?
Next Rama Navami Festival Images For Students 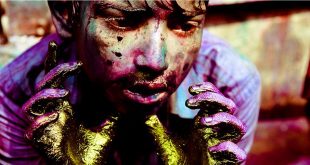