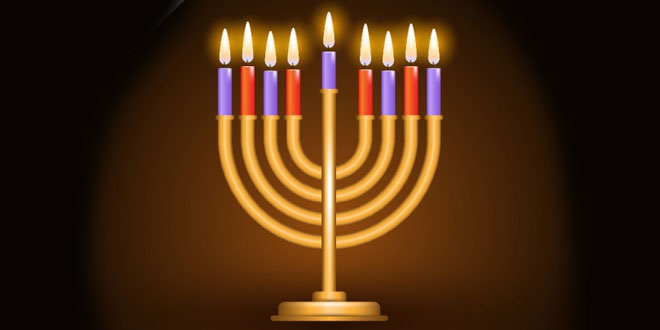 A hanukkiyah is a candelabrum with eight candle holders in a row and a ninth candle holder set a little above the others. It’s different from a menorah, which has seven branches and was used in the Temple before it was destroyed in 70 CE. A hanukkiyah is nevertheless a kind of menorah.

The hanukkiyah is used during the Jewish holiday of Hanukkah and commemorates the miracle of the oil. According to the Hanukkah story, once Jewish revolutionaries had retaken the Temple from the Syrians they wanted to rededicate it to God and restore its ritual purity. Eight days worth of oil were needed to complete the ritual purification, but they were only able to find one day’s worth of oil. They lit the menorah anyway and miraculously the oil lasted for eight full days.

In commemoration of this event Hanukkah is celebrated for eight days and a candle is lit on the hanukkiyah on each of those days. One candle is lit the first night, two the second, and so on, until the final night when all the candles are lit. Each of the eight candles is lit with a “helper” candle known as the shamash. The shamash is lit first, is used to light the other candles, and then is returned to the ninth candle spot, which is set apart from the others.

A menorah is a candelabra, and can be used for Hanukkah if it has nine stems. Another word for a Hanukkah menorah is hanukkiyah. A hanukkiyah has one stem for each of the eight days of Hanukkah, and one for the shamash, or “the helper candle” that is used to light the other candles. Candles are added each night from right to left and they are lit from left to right.
Share