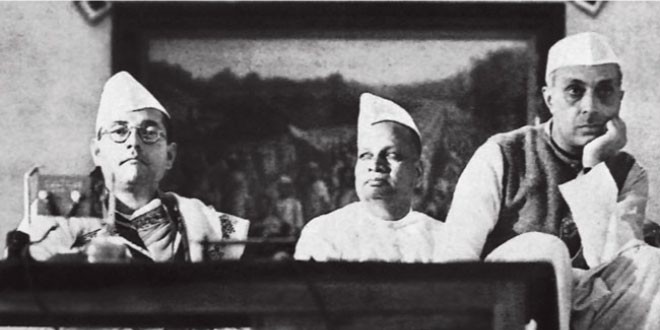 Was Netaji Subhash Chandra Bose Fascist? During his lifetime, Bose was frequently denounced as a fascist or even a Nazi, particularly in the wake of the radical, revolutionary (as opposed to reformist) views he expressed in radio addresses broadcast to India from National Socialist Germany and, later, from quasi-fascist Japan.

For example, The Statesman, a highly influential Calcutta periodical, charged in November 1941: “Mr. Bose’s views are those of the Nazis, and he makes no secret of it,”

While the BBC, Britain’s worldwide radio voice, frequently accused him of “Fascism” and “Nazism.”

Additionally, historians and writers who do not admire Bose readily point up his “fascist” views. A.M. Nair, a historian who has written favorably of Indian revolutionary Rash Behari Bose (who had sought Japan‘s help during and after the First World War), found nothing to praise about Subhash Chandra Bose. After all, wrote Nair, he was clearly a fascist.

So, to come back to the question, “Was Netaji a Fascist?” the short answer is, “Maybe”.

But not in the brutish, discredited sense of “fascism” as we understand the term today. And there are various reasons for that. Three of the main reasons are:

First, Netaji was too much of a humanist to be an archetypal fascist, and people who worked closely with him said that while he believed in “military discipline”, he was, in fact, very democratic in the public roles he played over the years. During his tenure as Congress Party president, for example, he never acted in an un-democratic manner, or sought to use un-constitutional methods or powers.

Second, unlike the archetypal fascist, he was extremely inclusive in his approach, towards all groups and peoples (including women). The fact that the three top leaders of the INA who were tried for treason in 1946 were General Shahnawaz Khan, Colonel Gurbaksh Singh Dhillon and Colonel Prem Sahgal eloquently says it all – as does the fact that the Rani of Jhansi Regiment took part in Netaji’s Burma campaign, shoulder to shoulder with the men of the INA regiments.

And third, any authoritarian impulse came, not from a pathological obsession for adulation or power (as is the case with the archetypal fascist leader), but simply from his frustration with the perceived ineffectiveness of other alternative systems.

It is fair to conclude, therefore, that perhaps Netaji was not a fascist at all. He was, rather, a rugged autocrat in the style of Kemal Ataturk, the father of modern Turkey, who re-created his nation based on his “Six Arrows”, or fundamental principles, of Republicanism, Populism, Nationalism, Secularism, Statism and Reformism, which he personally supervised and implemented over a period of 15 years. It was just the kind of thing that Netaji might have done.

Netaji died (or disappeared, depending on your point of view) on August 18, 1945, when he appears to have been on his way to Manchuria, en route to Russia, to meet with Stalin and seek his help in continuing the fight for India’s freedom. One theory, of course, is that Stalin had him despatched to a concentration camp in Siberia, where he ultimately died. Which would have been such an ironic thing, considering the fact that of all the world leaders of the time, Stalin was one of the people whom Netaji held in the greatest esteem.

Previous Is the controversy about Netaji Subhash Chandar Bose death important to his daughter Anita Bose-Pfaff?
Next Good Old Days: Akshay B. Singh