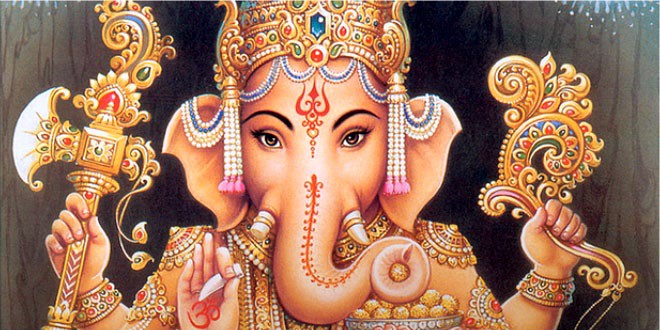 Is Lord Ganesha Married or Celibate? It is interesting to note how, according to tradition, Ganesha was generated by his mother Parvati without the intervention of her husband Shiva. Shiva, in fact, being eternal (Sadashiva), did not feel any need to have children. So Ganesha was born out of the exclusively female desire of Parvati to procreate. Consequently, the relationship of Ganesha and his mother is unique and special.

This devotion is the reason that the traditions of southern India represent him as celibate. It is said that Ganesha, believing his mother to be the most beautiful and perfect woman in the universe, exclaimed: “Bring me a woman as beautiful as she and I will marry her.”

In the north of India, on the other hand, Ganesha is often portrayed as married to the two daughters of Brahma: Buddhi (intellect) and Siddhi (spiritual power). Popularly in north India Ganesha is accompanied by Saraswati (goddess of culture and art) and Lakshmi (goddess of luck and prosperity), symbolizing that these qualities always accompany he who has discovered his own internal divinity. But this does not mean that Saraswati and Lakshmi are consorts of Ganesha. Symbolically this represents the fact that wealth, prosperity and success accompany those who have the qualities of wisdom, prudence, patience, etc. that Ganesha symbolizes.

GANESH CHATURTHI FESTIVAL
Ganesh Chaturthi is a highly preferred and most popular festival of the Hindu religion. It is celebrated annually in the month of August or September with big enthusiasm. It is celebrated as a birth anniversary of the Lord Ganesha. Ganesha is a son of Mata Parvati and God Shiva. Lord Ganesha is a most favorite God of everyone especially children. He is the God of wisdom and prosperity so people in Hindu religion worship him to get the same. People bring a clay statue of the Ganesha and keep in home on Chaturthi and do worship for 10 days and perform Ganesh Visarjan on 11 day means on Anant Chaturdashi.
Share