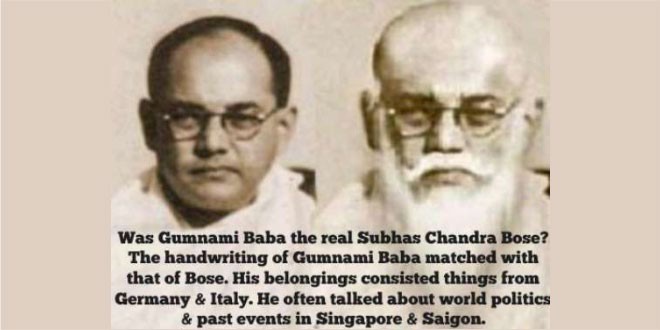 Bhagwanji, also known as Gumnami Baba, was a mysterious Indian monk who in 1985 lived at Ram Bhawan in Faizabad, near Ayodhya in Uttar Pradesh. Till date, his real identity and activities remain obscure. A great number of people maintain that he was the Indian freedom fighter Netaji Subhas Chandra Bose, living incognito. People who support such a stand challenge the death of Subhas Chandra Bose in a plane crash in 1945. It is said that Bhagwanji had an uncanny resemblance to Netaji Bose. Some people believe that Bhagwanji died on 16 September 1985, while some dispute this.

There had been at least four known occasions when Bhagwanji reportedly claimed he was Netaji Subhas Chandra Bose himself. Handwriting analysis expert and former Additional Director of the National Institute of Criminology and Forensic Science, Dr B. Lal deposed before the Justice Mukherjee Commission of Inquiry that probed into the disappearance of Netaji, that the handwritings of Bhagwanji and Bose did match. However, the commission did not accept the claim that Bhagwanji was Bose, for want of any clinching evidence. At the same time, the commission also rejected the official view of the Indian government that Bose died in 1945. In light of the commission’s rulings, the obscurity left behind by Bhagwanji makes enough reason for a debate even today.

Justice Manoj Kumar Mukherjee who probed into the disappearance of Netaji Subhas Chandra Bose stated in his report that the sanyasi of Faizabad (Bhagwanji) was not Bose as there was no clinching evidence to prove it. However, he inadvertently stated in a documentary shoot that he believed Bhagwanji was none other than Bose. This revelation supports the view that Bose had not died in the plane crash in 1945, and was in fact in India after that.