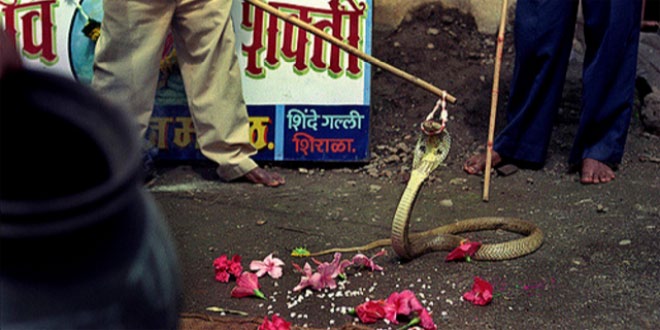 How to celebrate Nag Panchami? It is on the fifth day of the bright half of the Shravan that Naga Panchami, or the festival of snakes, is celebrated in India. Snake worship, no doubt, owes its origin to man’s natural fear of these reptiles. However, in Hindu culture, they own a prominent place. Hindu mythologies are filled with stories and fables about snakes, the most important being the Sheshnaga of Lord Vishnu (it is on this snake that Lord Vishnu reclines while sleeping in the sea). Thus, it is quite understandable that a festival called Naga Panchami is observed in India, in the honor of snakes, every year.

Nag Panchami is one of the most ancient fasts in India and also finds mention in the Puranas. It is believed to be one of the most auspicious days of the entire year. According to the Bhavishya Purana, when men bathe the snakes Vasuki, Takshaka, Kaliya, Manibhadra, Airavata, Dhritarashtra, Karkotaka and Dhananjaya with milk, on the fifth day of the bright fortnight of Shriven, they ensure freedom from danger for their families. As per a legend, on the day of Nag Panchami, ploughing a field is forbidden.

There are a number of legends associated with Naga Panchami. One has it that on this day, while tilling his land, a farmer accidentally killed some young serpents. The mother of these serpents took revenge by biting and killing the farmer and his family, except one daughter, who happened to be praying to the Nagas. This act of devotion resulted in the revival of the farmer and the rest of his family. Since then, Naga Panchami has been celebrated in India. It is believed that in reward for worship, snakes will never bite any member of the family.

There is yet another legend related to the festival. It goes that young Lord Krishna was playing with the other cowboys near river Yamuna, when the ball got entangled in the high branch of a tree. Krishna volunteered to climb the tree and fetch the ball. Below the tree, a terrible snake Kaliya used to live in the river. Suddenly Krishna fell from the tree into the water. The terrible snake came up with anger, but Krishna started jumping on its head. Finally, Kaliya said sorry to Lord Krishna and He forgave the snake and let it go free. Since then, on Nag Panchami day, the victory of Krishna over the Kaliya snake is commemorated.

In India, snakes are so revered that temples have also been erected in their honor. There is a particularly famous one in Mysore, at a place called Subramania (Sheshnaga). The Naga culture was fairly widespread in India before the Aryan invasion, and continues to be an important segment of worship in certain areas. After the invasion, the Indo-Aryans incorporated the worship of snakes into Hinduism. The thousand-headed Ananta is Vishnu’s couch and also holds up the earth, while snakes play an ornamental role in the case of Shiva. Naga Panchami is another form of honoring the snakes.