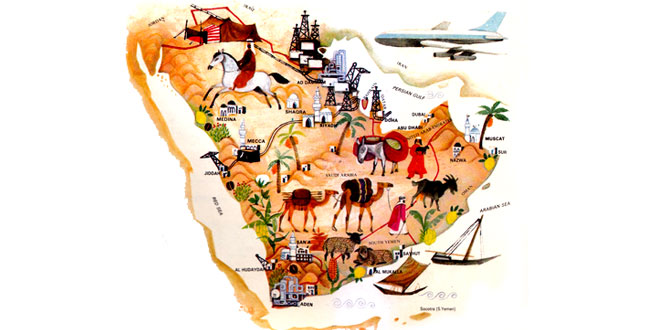 Desert cover nearly nine-tenths of Saudi Arabia. The Great Nafud, a sand desert in the north, is connected by the Ad Dahna sand belt with the Rub’ al Khali (the ‘Empty Quarter’) in the south. Continuous vegetation cover is found only along the coast and in oases. Elsewhere there are only occasional drought-resistant plants. The wildlife includes antelope, gazelle, hyena, jackal, leopard and wolf. Oil dominates the economy. Saudi Arabia’s oil-fields on the Persian Gulf are the world’s largest, containing about one-third of the world’s total oil resources. As a result, Saudi Arabia is one of the richest countries today. It is using revenue from oil sales to diversify the economy and raise living standards.