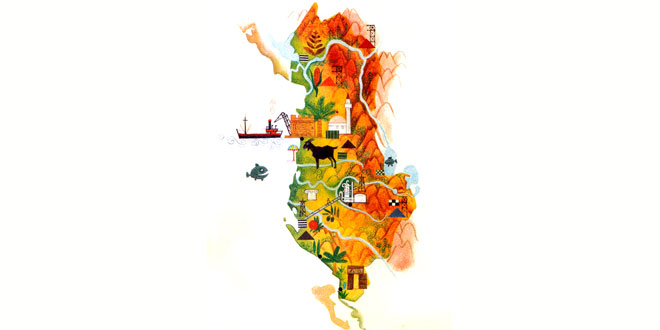 The historical architecture of Albania’s capital, Tirana, is a reminder that the country was long ruled by the Ottoman Empire. Albania is a mountainous country. The North Albanian Alps are in the north, the limestone Korab range is in the east, and the Southwest Uplands are in the south. The coastlands are low-lying and flat, with many shallow bays and extensive marshes. Most Albanian rivers are short and unnavigable. They are used chiefly for irrigation and for hydroelectric power.

Farmland covers 42 per cent of Albania and agriculture employed 61 per cent of the work-force in 1980, an extremely high figure by European standards. The chief crops are cereals, citrus fruit, cotton, fruit, grapes, potatoes, tobacco and vegetables. Sheep, goats, cattle and pigs are reared. Industry employed only 25 per cent of the work-force in 1980 and Albania is one of Europe’s least developed nations. But since the end of the Second World War, Albania has developed metallurgical, engineering, chemical, textile and food processing industries. The country has considerable resources, including asphalt, chromite, copper, iron ore, lignite, nickel and oil. Albania has few railways and most freight is hauled by road. Tirana has regular air services to Rome, Belgrade and Budapest.