The giraffe is related to deer and cattle, but is placed in a separate family, the Giraffidae, consisting only of the giraffe and its closest relative, the okapi. Its range extends from Chad to South Africa.

Giraffes can inhabit savannas, grasslands, or open woodlands. They prefer areas enriched with acacia growth. They drink large quantities of water and, as a result, they can spend long periods of time in dry, arid areas. When searching for more food they will venture into areas with denser foliage.

The giraffe evolved from a 3 metre (10 ft) tall deer like mammal which roamed Europe and Asia 30-50 million years ago. Fossil records show that early giraffids had shorter necks and were more stout in structure. Some had a leg length 83% that of the modern giraffe. There seems to be no parallel increase in neck length in relation to other body parts. The modern giraffe first appeared about 1 million years ago.

Female giraffes associate in groups of a dozen or so members, occasionally including a few younger males. Males tend to live in “bachelor” herds, with older males often leading solitary lives. Reproduction is polygamous, with a few older males impregnating all the fertile females in a herd. Male giraffes determine female fertility by tasting the female’s urine in order to detect estrus, in a multi-step process known as the flehmen response.

Giraffes will mingle with the other herbivores in the African bush. They are beneficial to be around because of their height. A giraffe is tall enough to have a much wider scope of an area and will watch out for predators.

Giraffes are hunted for their hides, hair, and meat. In addition, habitat destruction also hurts the giraffe. In the Sahel trees are cut down for firewood and to make way for livestock. Normally, giraffes are able to cope with livestock since they feed in the trees above their heads. The giraffe population is increasingly shrinking in West Africa. However, the populations in eastern and southern Africa are stable and, due to the popularity of privately-owned game ranches and sanctuaries (i.e. Bour-Algi Giraffe Sanctuary), are expanding. The giraffe is a protected species in most of its range. The total African giraffe population has been estimated to range from 110,000 to 150,000. Kenya (45,000), Tanzania (30,000), and Botswana (12,000), have the largest national populations.

An unexpected danger to giraffes in captivity is that, as they are typically the tallest objects in a zoo, giraffes are at increased risk of being struck by lightning. In the wild, this hazard is reduced by the presence of trees; as well, the giraffe’s natural habitat range has an extremely low occurrence of lightning — NASA’s satellite lightning detection system indicates that the area receives an average of less than one cloud-to-ground flash per square kilometre per year. 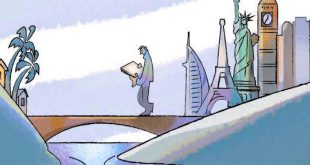