Thrips — Thrips (Order Thysanoptera) are tiny, slender insects with fringed wings (thus the scientific name, from the Greek thysanos (fringe) + pteron (wing)). Other common names for thrips include thunderflies, thunderbugs, storm flies and corn lice. Thrips species feed on a large variety of sources both plant and animal by puncturing them and sucking up the contents. A large number of thrips species are considered pests, because they feed on plants with commercial value. Some species of thrips feed on other insects or mites and are considered beneficial, while some feed on fungal spores or pollen. So far around 5,000 species have been described. Thrips are generally tiny (1 mm long or less) and are not good flyers, although they can be carried long distances by the wind. In the right conditions, many species can explode in population and swarm everywhere, making them an irritation to humans.

Thrips feed by piercing plant cells with their paired maxillary stylets, which form a feeding tube. Thrips, unlike the Hemiptera, have only one mandibular stylet, or if a second is present it is greatly reduced and non functional. The one fully formed mandibular stylet is used to pierce an entry hole in plant cells or pollen grains, wherein the maxillary stylets can easily enter the cell and suck out the contents. Thrips feed on hundreds of different crop plants, especially during flowering where they also feed on pollen.

Thrips in the genera Frankliniella (flower thrips) and Thrips also spread plant diseases through the transmission of viruses, such as Tospoviruses. The western flower thrips, Frankliniella occidentalis, has a worldwide distribution and is considered the primary vector of plant diseases caused by Tospoviruses. Over 20 plant infecting viruses are known to be transmitted by thrips. These enveloped viruses are considered among some of the most damaging of emerging plant pathogens around the world. Virus members include the tomato spotted wilt virus and the Impatiens necrotic spot viruses. Flower thrips are routinely attracted to bright floral colors (esp. white, blue, or yellow), and will land and attempt to feed. It is common for some species (e.g., Frankliniella tritici and Limothrips cerealium) to “bite” humans under such circumstances, though no species feed on blood; such biting does not result in any known disease transmission but skin irritations are known to occur. 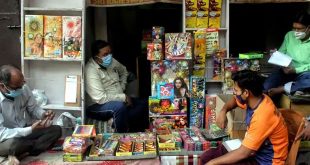