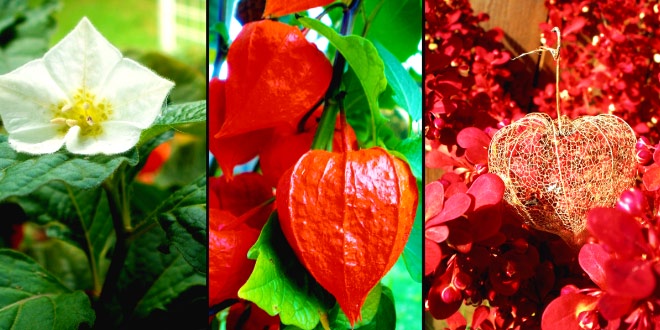 Chinese Lantern Plant — Chinese Lantern Plant, common name for a herbaceous perennial (a plant that lives at least three years) grown in gardens for its showy fruit. It is native to southeastern Europe and Japan and can survive winter temperatures as low as -40° C (-40° F). In colder regions, it is grown as an annual (a plant that lives one growing season). It gets its name from the calyx, the balloon-like, papery, red covering over the fruit, which resembles a Chinese paper lantern. It is also called winter cherry, strawberry tomato, and alkekengi.

Chinese lantern plant grows to about 60 cm (about 2 ft) in height. It has egg-shaped or heart-shaped leaves that are about 9 cm (about 3 in) long and may have a wavy or jagged edge. The leaves alternate along the stems that is, each leaf is on the opposite side of the stem from the leaf above. It has inconspicuous, white, five-petaled flowers hidden below the leaves. The flowers mature to form a bright, red fruit encased in the puffy, red calyx. The calyces, which are about 5 cm (about 2 in) long, cling in rows along the stiff stems through the winter. Chinese lantern plant has underground stems, called rhizomes, from which it rapidly forms new plants; it can spread aggressively and become weedy.

The fruit-laden branches can be added to winter flower arrangements, and the edible ripe fruit is used in jams. The unripe fruit is poisonous, however, and even the ripe fruit can cause intestinal distress if eaten in large amounts. During the Renaissance (14th century to 17th century), many physicians followed the Doctrine of Signatures, the idea that the shape of a plant suggests its medicinal purpose. They noted the bladder-shaped, puffy calyx, and used Chinese lantern plant to treat kidney and bladder disorders.