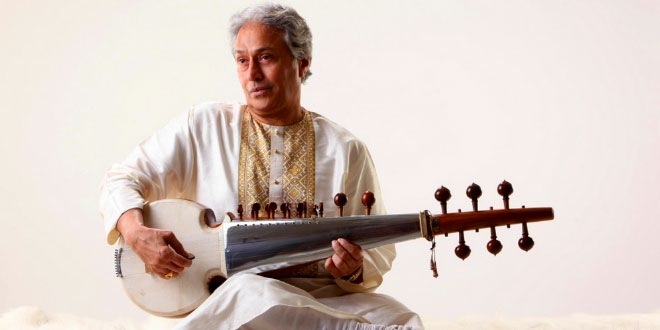 Legendary sarod maestro Ustad Amjad Ali Khan’s bonding with Punjab spans over 50 years and now he makes this bond stronger by playing for an album—Gurbani: Songs of Divine Wisdom

It was in 1964, more than 50 years back, that Ustad Amjad Ali Khan stepped on the Punjab soil for his first-ever concert, a relationship that only grew with each passing decade. On Monday, the revered sarod player came again, this time with a special offering for the Land of Five Rivers — Gurbani: Songs of Divine Wisdom!

The album that has six shabads by Ustad Harbhajan Singh Namdhari has the maestro on sarod. The album was launched by Parkash Singh Badal, Chief Minister of Punjab in Chandigarh. The legend opened up on this latest album and more…

“Gurbani: Songs of Divine Wisdom is my tribute to Punjab,” says Ustad, who finds a true Sufi saint in Guru Nanak Dev. “He gave the message ‘Sab ka rab ek hai’, those who are fortunate got the message, others are caught in the trap of religious identities.” In fact, Bhai Mardana would play rubab for Guru Nanak Dev and sarod belongs to same family of instruments.

Ragi Harbhajan Singh Namdhari has learnt sitar under Ustad Khan in his younger days. “In fact, it was at the suggestion of my sons, Amaan and Ayaan, we worked together on this album.” Gurbani that’s out in the market is recorded by Times Music.

“Our culture is all we have,” says and believes Khan Saheb, who along with his sons ensured that the recital showcased the finesse in exact allotted five minutes at the Nobel Peace Prize Ceremony that bestowed the highly regarded honour to Kailash Satyarthi and Malala Yousafzai in the company of music giants, including Steven Tyler and Queen Latifah. And, he takes great pride in our diverse culture which is interdependent. “There wouldn’t be any Amjad Ali Khan, had there been no Hemendra Chandra Sen, I couldn’t play if he didn’t make a fine sarod for me. There would be no Pandit Ravi Shankar without his Guru Allauddin Khan…”

Ours is an inclusive culture, believes Ustad Amjad Ali Khan, who has been referred to as ‘Pandit’ on occasions more than once. “The person addressing me as Pandit is only giving me love and respect, so why should I correct him,” he ask in all his earnestness. While he wants the classical barrier to break free, for him any sweet melody is classical. Any one, whose music is appealing, is classical be it Sunidhi Chauhan, Shreya Ghoshal or Kaushiki Chakraborty.

Sitting in Strawberry Fields High School, sipping his black coffee, we come to know that one aspect that truly disturbs Khan Saheb is future of the children. “Over the years, I have seen that education just cannot instil love, compassion and kindness in human beings which is the need of the hour.” He strongly feels that those poisoning young minds into hatred and violence mustn’t success. “It falls on every parent and teachers’ shoulders to sit with wards without any books and talk of love, trust and care and give them a world they can flourish without a care.”

He continues to work. If Gurbani is his latest album, he has paid tribune to his father – Guru Hafiz Ali Khan in a book. He mentions his wife in conversation many times acknowledging her contribution in raising up fine instrumentalists Amaan and Ayaan, who accompany their father to concerts the world over.

In fact, once as the trio sat down to play at High Grove, Price Charles’ Duchy Home Farm, and Subhalakshmi Barua Khan sat in front row with distinguished guests, the boys touched their mother’s feet before starting the concert. Post the engaging recital, Prince Charles is said to have said, “I am not sure about mine but this legacy sure is to continue…”