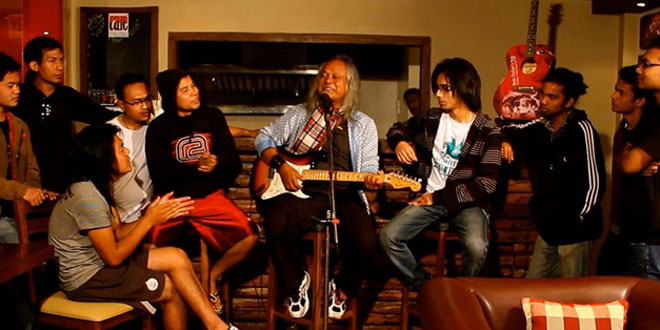 Shillong, often described as “India’s rock capital”, is leading the way in honouring the American singer and songwriter Bob Dylan for winning the Nobel Prize in Literature.

On Sunday, the Meghalaya capital reverberated with Dylan numbers — “Mr. Tambourine Man”, “Blowin’ in the Wind”, “The Times They Are a-Changin” and many more at the downtown Café Shillong and Cloud 9.

It’s all thanks to Lou Majaw, the Dylan of the East, for bringing together fans from across India and Europe here to honour the singer-writer “who redefined boundaries of literature”.

“Dylan has given so much to the world through his writings. God Bless Bob Dylan and the world for awarding him with the prestigious award,” Majaw told media. He celebrates the legendary singer’s birthday on May 24 in Shillong every year.

“We are blessed to be in a time and age when Bob Dylan is alive with us. We are all here to honour him for what he has given us,” said Majaw, as he started strumming “Mr Tambourine Man”.

The 75-year-old American rock legend received the prize “for having created new poetic expressions within the great American song tradition”.

Dylan is the first songwriter and also the first American, since novelist Toni Morrison (1993), to win the prestigious award.

The iconic singer-songwriter’s soulful, occasionally political and often irreverent songs during his five-decade-long career won him millions of fans worldwide.

“Well there is nothing much to say about Dylan. Everyone in this Café knows him. I personally came here to honour his latest achievement and so did all in here, despite our varied backgrounds,” Rahul Guha Roy, who flew from Kolkata to Shillong, said.

Documentary filmmaker Ranjan Palit, who too flew in from the City of Joy to be a part of the memorable event, said: “I am thankful to Lou Majaw and Shillong for honouring Dylan — the greatest living poet, because none in Kolkata was doing it.”

An Australian couple, Digby and Diane Beard, who attended the event, felt that Dylan should visit Shillong to see for himself the love he inspires. “Bob Dylan should come to this little town to see and understand the respect that he has earned here. He (Dylan) needs to come here and honour Lou Majaw for introducing and keeping his songs alive in India,” the Beards said.

Dylan was born Robert Allen Zimmerman in 1941 and began his musical career in 1959, playing in coffee houses in Minnesota.