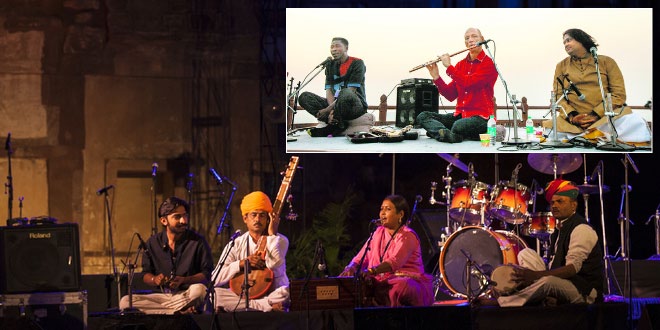 Yossi Fine, who was nominated for Grammy, agrees, “I wonder how come they (folk artists) know so much? Is it because your (India’s) music is generations old and they pick things like that. On stage, they stand up to you, never intimidated!” Wouter Kellerman hastens to add, “Your musicians have so much energy. Collaborating with them became such fun and learning experience. Members of Scotland’s music band Shooglenifty, echo, “The experience of Rajasthani folk music has been so enriching. We are looking forward to creating an album with it!”

So it is this raw and pure music mixed with the root music of countries like Brazil, Africa, Scotland, Ghana, Finland which one finds no where in the world, that Jodhour RIFF caters to the musical need of a hungry audience. This year RIFF brought more than 300 musicians from the Manganiyars, Langas, Meghwals, Raikas, and more communities which mesmerised the audience with the traditional musical instruments like khartal, morchang, algoza, murli, dhol, bhapang, derun, harmonium, sarangis, etc.

The performances had the audience go wild. They danced and sang along, especially with Wouter Kellerman and his associate the Africa’s famous singer Della Tamin. This fusion exceeded its time limit as the audiences kept on shouting for more!

In the very important “free-for-all musical-partnership” called RIFF Rustle, Yossi Fine led a mix of all RIFF artists. It had almost everyone from India’s funk rockers Ska Vengers band to Mahesh Vinyakram to drummers of Rajasthan creating magic.

This is the most compelling reason why the festival is endorsed by Unesco as a “Peoples’ Platform for Creativity and Sustainable Development” and is included among the leading international music festivals in the world.

Hence, RIFF is not only a music festival but a heady mix of rustic riffs, root textures, contemporary arrangements and global rhythm making. It encourages and promotes original people’s music.

This heritage festival is a not-for-profit partnership project involving two of India’s leading heritage trusts — the Mehrangarh Museum Trust (MMT) and the Jaipur Virasat Foundation (JVF). It has Mahraja Gaj Singh of Marwar, Jodhpur as its chief patron and Sir Mick Jagger of Rolling Stones fame, as the international patron.

A final word of praise comes from Yossi Fine and Wouter Kellerman after the performances, “Amazing… your musicians (from Rajasthan) are way beyond belief. They are the strongest, most melodious, and undefeatable! They don’t go by the rules but the heart. We learnt so much.”

Did we recall Beethoven saying, “Music is a higher revelation than all wisdom and philosophy?

Pages: 1 2
Share
Previous What is the name of present Guru of the Sikhs?
Next Sathya Sai Baba