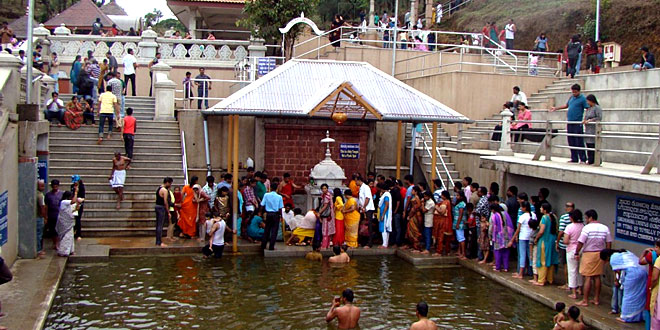 Tula Sankranti is one of the twelve sankrantis of a Hindu Panchang or calendar. Tula Sankranti is also known as Garbhana or Garvana Sankranti. It is celebrated as an auspicious occasion on the first day of the Kartika month in the Hindu Solar panchang. It also coincides with Mahastami.

All over India, Tula Sankranti is celebrated with significance attached to social, cultural, and religious aspects. It is especially considered very auspicious in the states of Odisha (Orissa) and Karnataka. In Karanataka, the Coorg or the Kodagu district celebrates Tula Sankramana with much bang and bustle and reverence being paid to Goddess Cauvery originating at Tala Cauvery.

In Odisha, the day of Tula Sankranti earmarks the milestone of that year in the life of the farmers, as the labor of their day-to-day toil in the agricultural fields is rewarded by the mature paddy fields pregnant with tiny corns in their womb. The name Garbhana Sankranti is attributed to the time of fertilization of the corn in the fields. The farmers see Goddess Lakshmi – the authority of Wealth, Prosperity and Fertility – in the rice plants. They worship Goddess Lakshmi with offerings of rice and paddy taken fresh from their paddy fields. In some parts of Odisha, farmers also offer ’Wheat’ grains and branches of ‘Kara’ plants to Goddess Lakshmi and then take them to their agricultural fields for plantation. This custom is practiced with a determination to reduce the incidence of flood and drought in their village as well as protect their crops from insects and pests. Another important custom popular among villagers is that they measure rice, wheat and pulses with the hope that all through the year they might be able to measure the produce adequately due to high yield of these crops.

In the Coorg district of Karnataka, the festival of Tula Sankramana is celebrated with much pomp and ado. At Tala Cauvery, the point of origin of the Cauvery river, people get together to have a dip in the holy waters of Tala Kavery. The common belief is that at the exact moment when the Sun enters or faces the Tula Rasi, a fountain from a small tank springs up and fills another larger tank. People rush to collect this water as they believe that a small quantity of this water when fed to the dying members at home will cut them from the cycles of births and deaths. Goddess Parvati, who took the form of river Cauvery, is worshiped by placing betel leaves and areca (palm) nuts, bangles, sandalwood paste, vermillion, and turmeric. A vegetable or any natural produce, especially Cucumber and Coconut, is covered with a silk cloth in red or green and decorated with flower mala (garland) and silver or golden jewellery. This symbolizes Goddess Parvati and the worship of this vegetable is called Kanni Puje.

Orriyans wear new clothes on the day of Tula Sankranti. In Odisha, different types of dishes are prepared to rejoice the occasion of Tula Sankranti. The members of the family sit together for a sumptuous lunch with an expectation that the whole of the remaining year passes along with plentiful food and wealth.

In Karnataka, on the Tula or Kaveri Sankramana day, people prepare vegetarian foods at home. No hot beverages (alcohol) are allowed to be consumed. The usual menu at home is Dosa, vegetable side dish, and Paayasam. The side dish prepared with yellow or white pumpkin or the Kumbala dish is common in most houses.

Skanda Purana of ancient Indian literature has many stories relating to origin of river Cauvery. One of the stories is about a girl called Lopamudra or Vishnumaya, the daughter of Lord Brahma, who later became the adopted daughter of Kavera Muni. Kavera Muni renamed her as Kaveri.

Agastya Muni fell in love with her and married her. One day, Agastya Muni was so involved in theological or religious discussions that he forgot to attend to his wife Kaveri. Due to his negligence, Kaveri fell into Agastya Muni’s bathing tank and overflowed as river Cauvery to benefit the land and the people of Kodagu which was her original wish before marriage.

Kaveri meets three other rivers throughout its course from Tala Kavery until it finally merges into Bay of Bengal. During the month of Tula, people take holy dips at Bhagamandala, Karnataka and Mayavaram, Tamil Nadu.