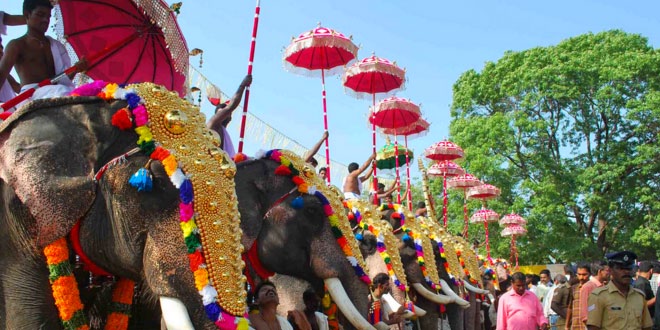 Pooram is the most colourful of all the temple festivals of Kerala. It is celebrated in Thrissur at Vadakkumnathan temple in the month of Medam (April) where the regaining deity is Lord Shiva. Situated on a hillock right in the centre of the city, the spaciously laid out ‘kshetram’ or temple attracts thousands of devotees from all over the land during the Pooram festival.

It is a magnificent spectacle with fireworks, umbrella showing competition and a splendid elephant procession.

The best elephants of the state from the various temples in Kerala are sent to Thrissur to participate in the Pooram festival. At 3′ 0 Clock in the night spectacular display of fireworks begins. It lasts till 6′ 0 clock in the morning. By afternoon the festival ends.

Thrissur Pooran, the pooram of all Poorams, falls in April every year. It is intrinsically a people’s festival in all respects. It is different from other national festivals like the Kumbha Mela of Uttar Pradesh, the Vijayadashami pageantry of Mysore or the Rath Yatra of Orissa. Pooram is participated and conducted by people cutting across all barriers of religion and caste.

The unique catholic nature of Pooram could be traced to its genesis two centuries ago when Sakthan Thampuran (1751-1805), the very architect of Thrissur, became the ruler of the erstwhile state Kochi.

He took up the renovation of the Vaddakkannathan temple complex which was enclosed by high walls. The four massive gopurams of the temple have been ascribed to him. At a time when nobody would have dared to look straight at the almighty Namboodiris, Sakthan Thampuran stripped of their powers and took over the administration of the temple that claimed an antiquity of more than three centuries.

It was he who made the sprawling Thekkinkadu Maidan the major venue of Thrissur Pooram. Again, he entrusted the onus of holding the festival to the two public temples – Tthiruvampadi and Paramekkavu temples that had never been under the control of the Namboodiris. He himself is said to have drawn up the 36-hour hectic schedule of the Pooram festival.

Thrissur Pooram, the mother of all temple festivals in the state, is essentially one of spectacles. The two devaswams – Thiruvampadi and Paramekkavu – explore and exploit every source at their command to make this annual festival a memorable one. It is celebrated with a colourful procession of caparisoned elephants, parasol exchanges; drum concerts, display of pyro-techniques and refreshing scenes of public participation.