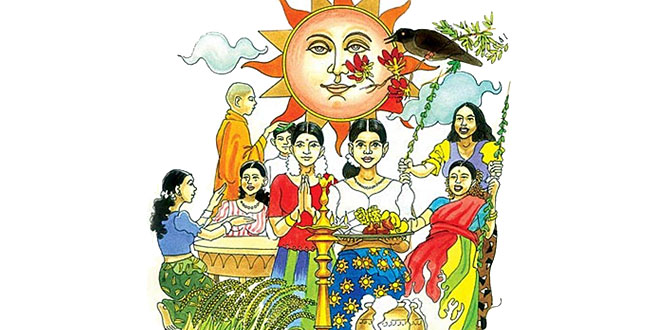 The month of Chitthirai or Chittrai also called as Varushapirapu i.e. from mid-April to mid-May is the first month of Tamil calendar (Kara year). The month usually starts from 14th April, the day known as Tamil New Year. According to Hindu Mythology, this is the day on which Lord Brahma (the creator of the universe) started the creation of the world. It is also said that on this day, Goddess Meenakshi got married to Lord Sundareswarar.

This is an auspicious occasion for Tamilians (people of Tamil origin) living all over the world. People exchange greetings by wishing “Puthandu Vazthukal” – Happy New Year, with great passion.

The first day of Tamil calendar starts with some popular beliefs and faiths. People rise early in the morning and go for ‘kanni’ – the auspicious sight. The belief is that this brings good fortune throughout the year. The auspicious things for kanni might be Gold and silver jewelry, betel leaves, nuts, fruits and vegetables, flowers, raw rice and coconuts etc. The auspicious sight is then followed by a ritual bath and visiting temple to pray for a prosperous and happy New Year. After which, the Panchangam (almanac) is read. Sometimes, a decorated lamp kuthuvillakku is placed in the center of colorful Kolam to bring light to the house.People greet each other “Puthandu Vazthukal” which means Happy New Year.

The women decorate the entrances of their houses with ‘Kolam’ (design made with rice flour) and the doorway with mango leaves. Another highlight of this festival is the preparation of ‘Maanga Pachadi’. It is a dish made of raw mangoes, jaggery and neem flowers, tasting sweet, sour and bitter one at the same time. This signifies all aspects of our life and tells us to face happiness and sorrow with equal ease.

On this day several fairs and cultural programs are organised at different places all over the state. A grand Car Festival is held at Tiruvadamarudur near Kumbakonam every year on April 14. Also in Madurai witnesses marriage of Goddess Meenakshi (Parvati) to Lord Sundareswarar (Lord Shiva) in the form of ‘Chitthirai festival’ with great grandeur. Offerings to the deities, comprising of food, flowers and fruits is an important component of the festival.