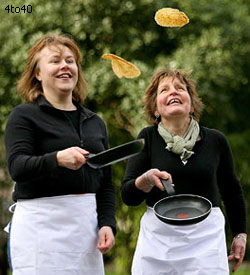 The other name for this day, Pancake Day, comes from the old English custom of using up all the fattening ingredients in the house before Lent, so that people were ready to fast during Lent. The fattening ingredients that most people had in their houses in those days were eggs and milk. A very simple recipe to use up these ingredients was to combine them with some flour and make pancakes!

The custom of making pancakes still continues today, and in many U.K. towns and villages pancake races (where people race with a frying pan while tossing a pancake in it!) and pancake tossing competitions are held on Shrove Tuesday.

In other countries Shrove Tuesday is known as ‘Mardi Gras’. This means ’Fat Tuesday’ in French and also comes from the idea of using up food before Lent.

Many countries round the world have Mardi Gras celebrations and carnivals. Some of the most famous are in Rio de Janeiro in Brazil, New Orleans in the U.S.A., Venice in Italy and Sydney in Australia.