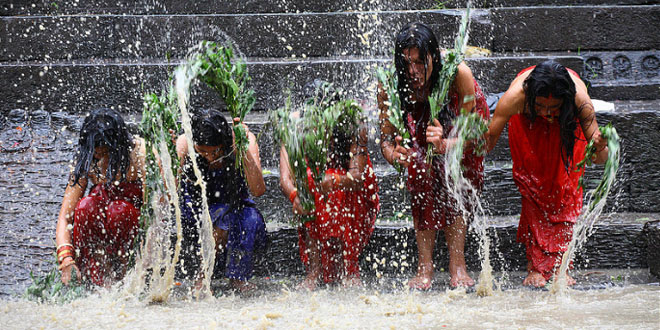 Rishi Panchami is celebrated with great joy and festivity in different parts of India as well as in Nepal. Different places have distinct significance for the festival. Mainly, the festival is celebrated in honor of Sapta Rishis.

According to Hindu calendar, Rishi Panchami is celebrated on the fifth day of the Shukla Paksha (Waxing Phase of moon) in the Hindu month of Bhadrapada (August – September).

In India, people pay their homage to the Sapta Rishis – the seven sages – Kashyapa, Atri, Bharadhvaja, Vishvamitra, Gauthama, Jamadagni and Vashishta on the occasion of Rishi Panchami while in some parts of Kerala the day is also observed as Vishwakarma Puja.

Rishi Panchami is also celebrated in Nepal, the day is considered sacred and auspicious and dedicated to worship of Lord Shiva. Men and Women observe fast on this day and worship Lord Shiva. Few rituals are also associated with this day like women have holy bath on this day using special Datiwan herb. Few people install sanctified kalash on this day at their home and visit Lord Shiva temples.

India is famous for its culture, tradition, rituals and religious practices. Many of these were given to mankind by great Rishis and Sages of the ancient times. They have shown the right path that we need to follow, took care of the world through their powerful tapasyas and yagnas and dedicated their lives for the welfare of the mankind. The four Vedas – Rigveda, Yajurveda, Samaveda and Atharvaveda which form the backbone of Hinduism were written by the Rishis to enlighten the mankind.

In fact Hindus consider Rishis as their fore fathers and they all got divided into various families which were headed by these Rishis. That is how they inherited their Gotras from them. The Gotras were named after these Rishis and denote the family that they belong to. All Hindus strongly believe that their families are protected and taken care of by these powerful Rishis even today. In order to show respect and gratitude towards these great Sages we celebrate Rishi Panchami every year.

This auspicious day falls on the Shukla Panchami of Bhadrapada month. This is exactly after two days of Hartalika Teej and the next day of Ganesh Chaturthi. On this day Hindus all over the country pay homage to Saptarishis such as Rishi Kashyapa, Atri, Baradhvaja, Vishvamitra, Gauthama, Jamadagni and Vashistha.

On this day people wake up early in the morning and take a ritual bath in the holy rivers. They clean their teeth with an herb called Upmarga and bathe with an herb called Datwan. These herbs cleanse the body. Womenfolk apply a red mud all over the body before bathing. Then a mixture of curd, milk, basil and butter is drunk to clean the inner self. Such rituals are being followed to sanctify one completely. After all these, Lord Ganesha, Navagrahas, Saptarishis and Arundhati are worshiped. People fast on this day.

Women celebrate this day with lot of dedication. They observe Rishi Panchami Vrat on this day. They strongly believe that this will wash away all their sins acquired by them knowingly or unknowingly. In the olden days women were not allowed either in the house or in the kitchen during their menstrual periods.

Certain rules and regulations were set for women and they had to follow these during this phase, failing which they acquire Rajaswala Dosha. By performing Rishi Panchami Vrat women could get rid of this Dosha. Women begin their fast on Hartalika Teej and end it on this day. In some of the Hindu communities, this day is also observed as Bhai Panchami. Women tie Rakhis to their beloved brothers and pray for their long life.

There is a legend behind this festival and it reveals the importance of Rishi Panchami Vrat. There was a Brahmin called Uttank in a village. He lived with his wife Sushila and a widowed daughter. One night the Brahmin couple was shocked to see their daughter completely covered by ants. They were quite worried and approached a learned sage immediately. They pleaded him to help their daughter. Then the sage told that this condition was a result of the sins that she committed in her previous birth. He explained them that she entered the kitchen in the days of menstruation. He also suggested her to follow certain rituals on Rishi Panchami day, so that she could be relieved of this pain and dosha. With lot of dedication, the widow performed all the rituals and cleansed her mind, body and soul.