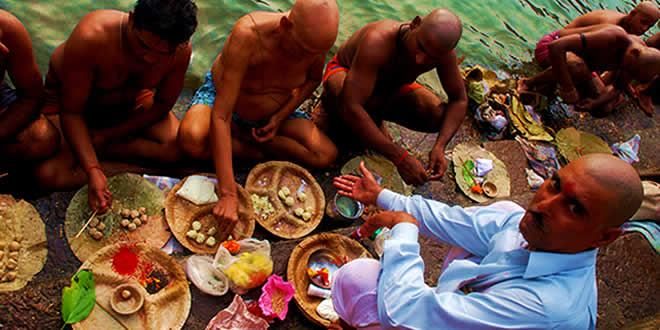 Pitru Paksha – Shraddha — The dark half of Ashvina (September-October) is observed as Pitru Paksha throughout the Hindu world especially India, and sacrifices called Shraddha is offered to the dead and departed ancestors of the family. On each day of the fortnight oblations of water and Pindas or balls of rice and meal are offered to the dead relatives by the surviving relatives. A shraddha is not a funeral ceremony but a supplement to such a ceremony.

It is an act of reverential homage to dead person performed by relatives, and is supposed to supply the dead with strengthening nutriment after the performance of the previous funeral ceremonies has endowed the ethereal bodies.

It is believed that until Shraddha, has been performed the deceased relative is a preta or a restless wandering ghost and has no real body. Only after the shraddha, he attains a position among the Petris or Divine Fathers in their blissful abode called Pitri-loka. A shraddha is most desirable and efficacious when done by a son.

The elder son or some other elder male member of the family performs shraddha in honor of the dead and offers oblations. Part of the food offering is also given to the cows and the crows. Bhramins are fed and given dan-dakshina, for it is believed that whatever is given to the Brahmins also reach the departed souls. Khir, a sweet milk and rice preparation, is especially prepared and offered to the Pitris on this occasion.

On the last day of the fortnight, i.e. Amavasya oblations are offered to all those dead ancestors whose tithi (Date) of dead is not known. In Brahma Purana the significance of this ceremony is described. During Pitru Paksha shaving of the beard, cutting of the hair, wearing of new clothes, pairing of the nails is not allowed.