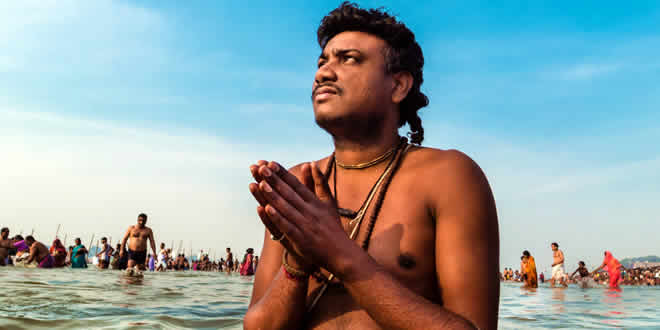 Devotees believe that a holy dip in sacred river Ganga and Yamuna on this day frees the soul from cycle of reincarnation and the person is detached from all the bad karmas committed in this birth and previous births as well. Thousands of devotees can be seen in Haridwar, Dashashwamedh Ghat at Varanasi and Triveni Sangam at Prayag.

After taking holy dip, devotees pour water in front of the sun and Shivlinga with great devotion; many other religious practices are performed along with holy chants in temples. Lectures on Bhagwat Gita and Ramayana are also organized during this time. Free meal is served to needy people throughout the day, in many ashrams and temples as part of ‘anna daan’ on this occasion. According to Hindu belief any kind of charity and donations (Daan) done on Paush Purnima gives great results in future and also fulfill all the wishes of the devotees. People give donations and do charities work according to their capacity.

The festival of Paush Purnima reminds us that we all belong to this universe and we all are connected to each other in some way. So we should take this day as an opportunity to be in sync with the whole universe. Taking a holy dip on this day symbolizes that we can’t live with the baggage of past karmas and sins .To start afresh and live a happy and simple life; we all must drop that burden. This last full Moon day of the winter season is a celebration at the end of darkness outside and within our souls as well.

Shakambari Jayanti is also marked on Paush Purnima and Devi Shakambari, who is an incarnation of deity Durga, is worshiped on this day. According to Hindu belief, once there was a huge drought for about hundred years. Due to this, people, plants and animals all started dying. Then people worshiped Goddess Durga. To save them all, deity Durga took an incarnation on earth as Devi Shakambari and showered rain to restore life in the world. Hence this day is also known as Shakambari Purnima.

Another important tradition of Charita Puja is also very significant in many parts of India. In tribal region of Chhattisgarh; people celebrate Charita festival with great fervor and enthusiasm. People distribute delicious traditional desserts to their friends and family members. These special desserts are made with til, jaggery and rice. People worship lord Satyanarayana on this day. After Satyanarayan katha, Prasad (holy meal) is distributed among all the devotees. Special feasts and parties are organized by the villagers where people sing their folk songs and dance. In East India married women visit temples and holy rivers where they pray for the long life of their family members.

Paush Purnima also marks the beginning of Kalpwas (the period of austerity), which is done throughout the month of Magha. Despite cold weather, thousands of devotees throng the Sangam Ghat in Allahabad (Prayagraj) to live in tents and perform sacred rituals during this time.