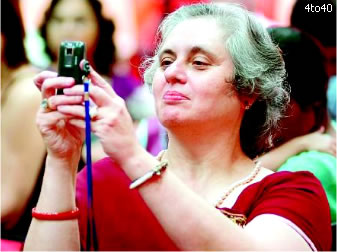 On New Year, Parsis Talk Change — There are 734 Parsis in the NCR Delhi, Gurgaon and Noida. And about half of them turned up to celebrate Navroze, the Parsi New Year, at Delhi Parsi Anjuman on Thursday evening. One piece of statistics must be haunting them in the past 18 months, the community had one birth, 21 deaths and one marriage!

Acutely conscious of the threat to its existence, the community is now talking of change even as it preserves its culture and heritage. At the gathering on Thursday evening, there was a vibrant display of sarees worn in the typical Parsi style and long white attire of the men. Even the old who turned up were not short on the spirit of the day. After a sumptous meal which included traditional dishes, a dance party was organized.

On this occasion, Chief Justice of India S H Kapadia was felicitated and scholarships given to many children. “Money has never been a concern for the people of our community. We want to make sure that children are given proper funds,” said Dadi Mistry, president, Delhi Parsi Anjuman.

“Our biggest strength as a community is the fact that we have blended with the fabric of India. Chief Justice Kapadia is a shining example of the success of our community,” he added.

“Zorastrians are imbibed with an essential virtue of integrity, which has helped me reach where I am today,” said CJ Kapadia, addressing the gathering. “The impact of the Parsis on India is inversely proportional to their numbers.”

“We have to procreate and there are no two thoughts about it. But we don’t force our young ones into anything like we were forced by our elders times have changed and we have to change with it,” said Mistry.

“On the contrary, I advocate inter-marriage. It is the only way to save our community. Our forefathers have done this mistake and we won’t follow them. I have a Christian daughter-in-law and a Muslim brother-in-law, and I hope that the community will follow my leadership.”

“In the midst of growing diseases and migration of Parsis from the country, my biggest concern is to keep the spirit of the Parsi culture alive. And it is only through events like this that we can accomplish that,” said Mistri.

The Parsis are said to have first arrived in north India during the reign of Akbar. At the old Parsi cemetery there is an inscription dating back to 1869. The Delhi Parsi Anjuman was formed in 1925 with just 40 Parsis. The Anjuman today runs the Parsi Dharamshala, a community hall that showcases Zoroastrian history and culture and an agiary or fire temple where the celebrations began on Thursday morning.