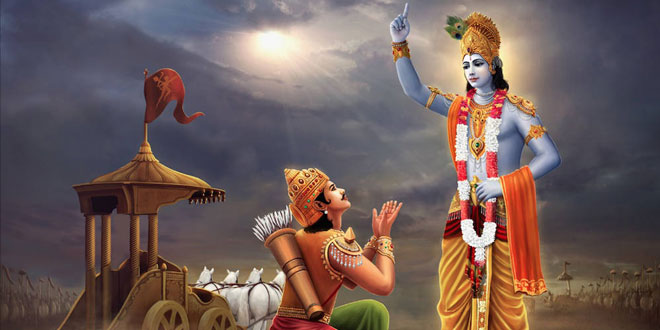 Mokshada Ekadashi is regarded as an auspicious day for the Hindus especially the Vaishnavas or the worshipers of Lord Vishnu because on this day Lord Sri Krishna, an avatar of Lord Vishnu narrated the Holy Bhagavad Gita (which became the religious book of the Hindus) to the Pandava Prince Arjuna on the battlefield of Kurukshetra (now known as Jyotisha Tirtha) as mentioned in the Hindu epic Mahabharata.

Arjuna, a great warrior asked Lord Krishna (his charioteer) to place his chariot in between the warring armies:

(Meaning: Oh Achyuta, please place my chariot between the two armies so that I can see the determined warriors present here.)

When Arjuna saw the battle, he could not believe his eyes. He was struck by despair and grief upon seeing his own kith and kin fighting and dying on the battlefield and was reluctant to wage war against his own cousins.

Thus Lord Krishna narrated the 700 verse religious discourse which came to be known as the Bhagavad Gita to the Pandava Prince. The day was Margasheersha Shukla Ekadashi or Mokshada Ekadashi.

Another legend about the Mokshada Ekadashi appears in the Brahmanda Purana. Lord Krishna narrates the story to the Pandava King Yudhisthira about a benevolent king in the city of Champakanagar who treated his subjects (the Vishnu worshiping Vaishnavas) like his family. One night the king had a terrible dream about his father suffering in hell.

The following day he narrated his nightmare to his wise council of ministers who advised him to approach the Paravata Muni or the Sage of the mountain. The Sage told the king that his father had wronged his wife and therefore was being tormented for his sin in hell. He further advised him to observe a Vrat or fast on Mokshada Ekadashi day in order to absolve his father from his sins. The king did likewise; his wife and children also followed suit and his father was redeemed.

Many Vaishnavas observe a 24 hour long fast to pay their respects to Lord Krishna. It is believed that those who fast regularly on this day will attain Moksha or salvation after death. Those who cannot observe a complete fast will observe a partial one consuming only vegetarian food, fruits, milk and dairy products and nuts. Consumption of garlic, onion, rice, beans and pulses is strictly prohibited on this day.

The Holy Bhagavad Gita and Lord Krishna and Lord Vishnu are worshiped on this day. There are discussions around the themes scripted in the Bhagavad Gita and religious scholars and priests are invited to deliver sermons. There are readings from other sacred scriptures like Mukundashtakam and Vishnu Sahasranamam as well. Eating fruits and leaves of the Bilwa or the Bel tree is mandatory on this day.

People read the Bhadavad Gita in which Lord Krishna describes how to live a good life, follow one’s dharma or duty without expecting anything in return or bothering about the consequences. Krishna asked Arjuna to be detached from his worldly desires and attachments in order to avoid the cycle of rebirth and attain complete salvation. Hence, this Ekadashi is also called Mokshada (giver of Salvation) Ekadashi.

It is also regarded as one of the best days to gift a Bhagavad Gita to a deserving person. Anyone who does so is bestowed with generous blessings from the Lord. 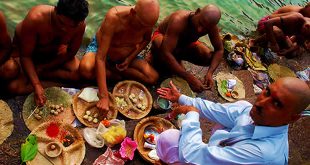