Memorial Day is a United States federal holiday observed on the last Monday of May. Formerly known as Decoration Day, it commemorates U.S. men and women who died while in the military service. First enacted to honor Union soldiers of the American Civil War (it is celebrated near the day of reunification after the civil war), it was expanded after World War I to include American casualties of any war or military action.

Many people observe this holiday by visiting cemeteries and memorials. A national moment of remembrance takes place at 3 p.m. Eastern Time. Another tradition is to fly the flag of the United States at half-staff from dawn until noon local time. Volunteers often place American flags on each gravesite at National Cemeteries. Many Americans also use Memorial Day to honor other people who have died.

Members of the Veterans of Foreign Wars take donations for poppies in the days leading up to Memorial Day; the poppy’s significance to Memorial Day is the result of the John McCrae poem “In Flanders Fields.” 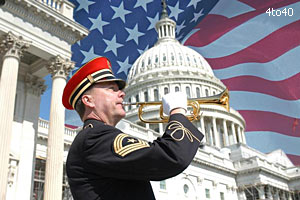 In addition to remembrance, Memorial Day is also used as a time for picnics, barbecues, family gatherings, and sporting events. One of the longest-standing traditions is the running of the Indianapolis 500, which has been held in conjunction with Memorial Day since 1911.

The National Memorial Day Concert takes place on the west lawn of the United States Capitol. The concert is broadcast on PBS and NPR. Music is performed, and respect is paid to the men and women who gave their lives for their country.