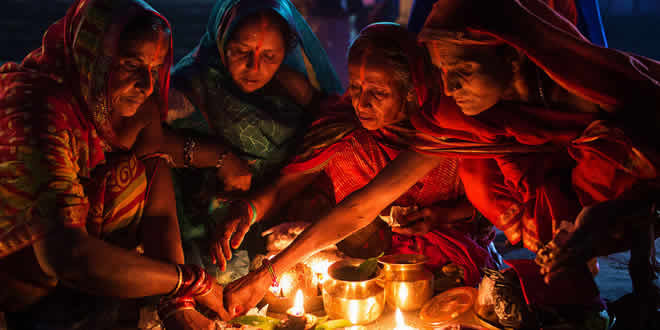 The full moon day or the 15th day in the Hindu month of Kartik, ushers in an auspicious occasion known as the Kartik Purnima. which has a great significance among Hindus, Sikhs and Jains. It coincides with the Sikh festival of Guru Nanak Jayanti and the religious day of the Jains who celebrate it by undertaking an auspicious journey or the Shri Shatrunjay Tirth Yatra to worship Lord Adinath at a the famous temple situated on the Shatrunjay Hills.

According to the Hindu mythology, Tripurantaka who was the manifestation of Lord Shiva, conquered the demon Tripurasura on this day. Lord Shiva redeemed the three lokas from the evil forces hence, the gods declared the day as a festival of illuminations, also called Deva-Diwali.

Kartik Purnima is also celebrated to commemorate the birth of Lord Vishnu‘s first incarnation, the Matsya (fish) avatar. It is also the birthday of Vrinda (the epitome of the Tulsi plant) and of Lord Kartikeya, the son of Shiva.

This day is also significant for Radha-Krishna devotees. It is believed that Krishna and Radha performed the raasa (dance) on this day and Lord Krishna worshiped her. Kartik Purnima is also dedicated to the dead ancestors. Its believed that prayers offered on Kartik Purnima offer positive results especially if the day falls under Kritikka, Rohini and Bharani Nakshatra.

On Kartik Purnima, a large number of people bathe in different rivers. According to the traditions, taking ritual bath in the rivers is considered auspicious. A person, who carries out charities, donations, ritual baths etc. on this special day, is granted with supernal joys.

Ideally, the observer should worship the six gods such as Shiva, Santati, Sambhuti etc at moonrise in order to attain divine blessings. Food known as Annakuta is specially prepared for the occasion and is then offered to gods in the temples. During the month associated with Kartik Purnima, Hindus refrain from non – vegetarian food, hair-cutting, cutting of trees, plucking of fruits and flowers and cutting of crops.

In Andhra Pradesh and Karnataka, Shiva Linga Mahajala Abhishekam is organized on the day. Kartik Purnima, is also a day to perform the Tulsi Vivah. These celebrations are also associated with the legend of Lord Kartikeya, who is said to have killed the demon Tarakasura.

In the city of Cuttack, Odisha this day is celebrated with much gusto where people float small boats made out of cork, colored paper or banyan tree bark while remembering the past maritime glory of Odisha as well as worshiping Lord Kartikeya. Huge images and idols of lords are set up and worshiped. Thereafter, the images are immersed in the Mahanadi River.

The annual Pushkar Mela, the largest cattle fair in the world, is organized in Pushkar, Rajasthan on Kartik Purnima. Thousands of camels, cows, bulls, sheep, goats etc., are brought there for sale. A large number of pilgrims take a dip in the sacred lake of Pushkar.

In Varanasi, the ghats are decorated with thousands of diyas. People also gift diyas to the priests. This day is also known as Kartik Diparatna as the houses and Shiva temples are illuminated throughout the night.

Saint Kabir Jayanti is celebrated in honor of Sant Kabir Das, a mystical saint and …